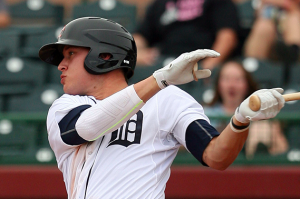 Ever since the Detroit Tigers traded Cameron Maybin to the Angels early in the offseason, they’ve had a vacancy in center field. Most consider prospect JaCoby Jones, an incredible athlete who’s had difficulty sticking at one position, to be the team’s center fielder of the future. Jones, of course, will have to earn that job during spring training, as he competes against Anthony Gose and Tyler Collins. Meanwhile, recent reports indicate that the Tigers have reached out to some of the center fielders on the free agent market, indicating Detroit could still fill that position from outside the organization.

Jones, who is 24 and has just 28 big league at bats to his name, is lacking experience but no less excited for the opportunity that awaits him at spring training. “It’s open for the center-field spot,” says Jones. “I know we have some outfielders out there, Collins and Gose. It’s going to be fun competing for the job in center field, and I’m going to do whatever I can, whenever I’m on the field to help the team win — play good defense, anything I can do. It’s going to be a fun experience out there for me in Spring Training, just to compete for the job.”

Unfortunately for Jones, that enthusiasm doesn’t necessarily translate to experience and MLB-readiness. Tigers GM Al Avila has indicated that Jones, who has less than 300 triple-A at bats and put up modest numbers at that level last year, could benefit from more seasoning in the minors. “I would say JaCoby Jones is going to be a really good defensive player,” Avila said about the state of the youngster’s development. “He’s very athletic. The question is: Will he hit enough to keep above water?”

The uncertainties about Jones, combined with the fact that Collins and Gose aren’t exactly established big league regulars, has the Tigers looking at the free agent market for a center fielder less than a month before spring training gets underway. Reports confirm that the Tigers have spoken with both Peter Bourjos and Gregor Blanco. Players like Austin Jackson, Desmond Jennings, Michael Bourn, and Drew Stubbs could also fit Detroit’s need, depending on how much the Tigers are willing to spend.

With Collins and Gose both being left-handed, a right-handed hitting center fielder like Bourjos or Jackson would be the best fit. Of course, Jones is also a right-handed hitter, and so a platoon with either Collins or Gose could help to ease Jones into a prominent role in the majors. On the other hand, a platoon may not get Jones enough at bats to continue his development and grow into an impact major leaguer. This could push the Tigers to sign a center fielder just to be on the safe side.

However, Jones, who certainly doesn’t lack any confidence, believes he’s ready, asserting that his cameo appearance in the majors last season has him prepared to take over the center field job full time this year. “All the stuff we’ve learned [was helpful], whether it’s the media, the meetings that we’ve had, talks about financial stuff, what to look forward to when you walk in the clubhouse, on- and off-the-field stuff, live situations with the fans, social media and everything,” Jones explains. “I’ve learned a lot of stuff. I wish I would have known that before I got called up last year. It was a good experience.”

Nothing is imminent with regard to the Tigers grabbing a center fielder off the free agent market, but it remains an option they’re considering. Avila implied early in the offseason that the Tigers wanted increased payroll flexibility, and so money could be a factor in Detroit deciding to sign another center fielder or not. However, the team doesn’t yet appear to be sold on Jones, and so whether the youngster likes it or not, he may have some more competition for the center field job when spring begins.