The Philadelphia Eagles have made quite a few questionable moves in regards to the most important player on offense during the offseason and training camp—the quarterback.

Their slate of questionable moves started with signing Sam Bradford to a two-year, $35 million contract followed by signing Chase Daniel to a three-year, $21 million contract and appeared to peak when the Eagles traded up to take an FCS quarterback—Carson Wentz– with the No. 2 pick. But the most recent decisions involving quarterbacks may be the most baffling. 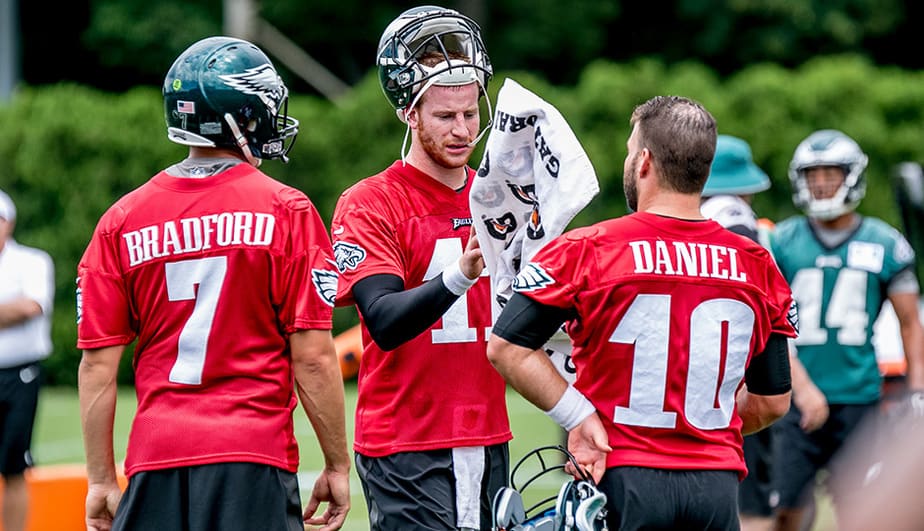 Over the weekend, the Eagles front office traded away their only experienced, healthy quarterback—Sam Bradford—and announced that they would be starting rookie Carson Wentz over Chase Daniel in Week One.

In spite of being injured and doing little throughout the majority of the preseason, the Eagles are going to start a guy that has only seen a handful of NFL preseason snaps and has never played against the caliber of guys he’ll see on Sunday (except in practice).

Dumb. There is no other word for it than dumb.

It is not hard to see why they took the trade. Bradford was a stopgap at best. It didn’t matter if he played like an All-Pro. Wentz would be the man next season. So eventually they were going to look to trade him. A good, healthy season would have increased his value, but chances are good no one would have offered what the Minnesota Vikings did (first round pick in 2017 and fourth round pick in 2018).

Accepting the trade makes for a less than ideal situation this season, but the Eagles would not get a better offer. Besides, they signed Chase Daniel for a reason. So maybe he gets a chance to prove what he can do and become future trade bait himself.

Surely, the Eagles would not start Wentz.

It was only a week ago that the team said he still had a rib that was only 60 percent healed. Even if the rib did heal in time, he is an FCS quarterback. Most quarterbacks from FBS schools fail to make a smooth transition. Those that get a chance to try usually don’t do it without at least getting a lot of playing time during the preseason.

With the exception of a handful of snaps in training camp, Wentz did not have reps with the first team until Monday’s practice—which was when he was finally deemed 100 percent healthy.

The Eagles staff gets paid a lot of money so they must have a pretty good reason for rolling the dice:

“We’ve got to be smart in how we handle it but at the same time fully expect him to perform how he’s capable of performing in what we’ve seen throughout OTAs and training camp …” Pederson said of Wentz (NFL). “What he did in all OTAs, what he’s done around this building, the plays he’s made in practice, in the one preseason game has given me confidence that he can lead this football team.”

OTA’s. OTA’s were actually used as a reason for starting a rookie quarterback for the first time since the team started Davey O’Brien in 1939. Somehow the team went from thinking they needed to hold him out so he could “improve his mechanics, footwork and mental approach to the NFL game” to thinking he is ready because of his “exceptional knowledge and experience in complex offensive schemes.”

Who are they trying to kid here?

More fans will be tuning into the Eagles season opener to see Wentz play. But if he doesn’t, the whole front office might want to update their resumes.

There is a silver lining for Week One–they are playing the Cleveland Browns. If there is any team that the Eagles could feel okay about trotting out a rookie from an FCS school with almost zero work in training camp and the preseason (outside of mental reps), it’s the Browns.

However, if there is anyone that can make the Browns competitive against a rookie quarterback from an FCS school, it’s their head coach, Hue Jackson.

It’s not a safe bet (because the Browns are still the Browns), but it might not be a bad idea to put a little money on Cleveland to cover the spread (four points) this week.