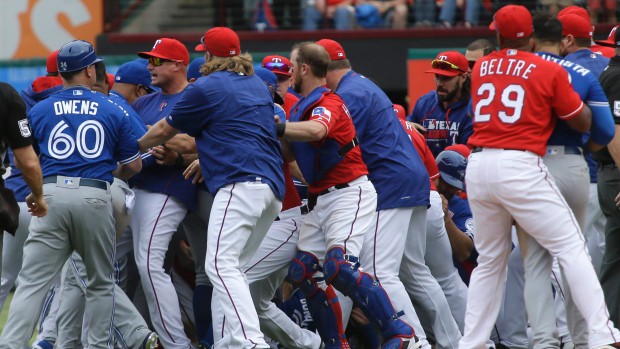 Dugouts clear as the Blue Jays and Rangers get into a benches clearing brawl.

On Tuesday, Major League Baseball handed down punishments to 14 players or coaches who participated in Sunday’s brawl between the Texas Rangers and Toronto Blue Jays that centered around an altercation between Rougned Odor and Jose Bautista.

To no one’s surprise, Odor received the harshest penalty, with MLB suspending him for eight games for the punch he landed on Bautista. However, he plans to appeal the suspension and will continue playing until his appeal is heard. Odor was in the Ranger’s lineup Tuesday night against the Oakland A’s, going 2 for 5.

Bautista received just a one-game suspension from MLB. It was Bautista’s overly-aggressive takeout slide of Odor that set off the Texas second baseman and led to the altercation between the two teams. The league says that Bautista’s post-game comments were a factor in the suspension in addition to his harsh slide and shove of Odor. Like Odor, Bautista intends to appeal and played Tuesday night, hitting his 7th home run of the season.

Toronto pitcher Jesse Chavez was suspended for three games after intentionally throwing at Prince Fielder later in the game after both teams had received warnings from the umpire crew. Chavez was active for Tuesday night’s game but did not appear after announcing his intentions to appeal the suspension.

Toronto manager John Gibbons also received a three-game suspension for returning to the field despite being ejected earlier in the game. Gibbons defended his actions, saying, “As a manager that’s your team out there. You should go out there and try to keep things under control.” First base coach Tim Leipner was suspended for one game because he returned to the Blue Jay’s dugout after his ejection. Both Gibbons and Leipner were also fined.

Texas shortstop Elvus Andrus also received a one-game suspension, with MLB accusing him “aggressive actions” after the benches cleared during Sunday’s incident. Unlike the other players, Andrus did not appeal the suspension. Instead, he sat out Tuesday’s game and is expected to return to the lineup on Wednesday.

Several players avoided suspension but did receive fines for their role in the brawl. From Texas, pitchers Matt Bush, A.J. Griffin, and Sam Dyson, as well as catcher Robinson Chirinos were all fined, as was bench coach Steve Buechele. From Toronto, Kevin Pillar, Josh Donaldson, and bench coach Demarlo Hale all received fines.

Bush receiving a fine instead of suspension is somewhat surprising, as he hit Bautista with a pitch, putting him on base right before his questionable slide. Bush did not speak to reporters after the game, but Texas manager Jeff Banister, who was not fined or suspended, was adamant that his pitcher did not intentionally throw at Bautista.

Aside from MLB hearing the appeals of the suspended players, the matter appears to be closed, unless these two teams happen to meet in the postseason as they did last year, when Bautista’s infamous bat flip ignited tension between the Rangers and Blue Jays that eventually boiled over on Sunday.