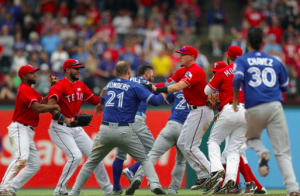 A thrilling walk-off home run in the American League wild card game has given us the grudge match that all of baseball wants to see: The Texas Rangers against the Toronto Blue Jays. These two teams met in the postseason last year, when the Rangers took issue with a Jose Bautista bat flip, and that tension escalated carried over into this season. In May, after Bautista was hit by a pitch (possibly on purpose) by Texas pitcher Matt Bush, he slid hard into Texas second baseman Rougned Odor, who proceeded to sucker punch Bautista, causing a benches-clearing brawl between the two teams. Now those same two teams are meeting in the ALDS, in what should be a fun series for spectators between two teams that appear to have some bad blood between them.

These two teams were awfully close in most offensive categories this year, including runs scored. However, the Rangers had a bating average 14 points higher than the Blue Jays, which is a significant difference, making them more likely to handle the type of high-level pitching that’s on display in the postseason.

What also separates the Rangers offensively are the late-season additions they made by acquiring Carlos Beltran and Jonathan Lucroy at the trade deadline, taking a chance on the resurgent Carlos Gomez, and the possible return of Shin-Soo Choo from injury. Those players added to a lineup that already includes Ian Desmond and Adrian Beltre makes the Texas lineup look awfully dangerous.

Of course, when clicking on all cylinders the Blue Jays can be dangerous offensively as well. Josh Donaldson and Edwin Encarnacion are likely to do the most damage, meaning the likes of Jose Bautista, Troy Tulowitzki, and Michael Saunders are supporting players. This means the Blue Jays have a rather deep lineup. At times, Toronto can be too reliant on hitting the long ball, but if they get going, the Blue Jays can be difficult to stop. However, with more speed and versatility, the Rangers get a slight edge over the Blue Jays offensively.

Most people don’t realize this, but Toronto’s rotation had the lowest ERA in the American League this year. Even more advantageous for the Blue Jays in this series is the fact that they won the wild card game with their fourth best starter getting the nod. This opens the door for Toronto to send Marco Estrada, J.A. Happ, and Aaron Sanchez to the mound in the first three games against the Rangers, with one of them returning in a possible Game 5.

Of course, the Rangers will be able to counter with Cole Hamels and Yu Darvish in Games 1 and 2, with Colby Lewis a strong candidate to start later in the series. Both Hamels and Lewis are experienced and accomplished postseason pitchers, which is not something that can be said for all of Toronto’s starters. If the Rangers are comfortable starting Hamels on short rest in Game 4 and throwing Darvish again in Game 5, the gap between starting rotations will close considerably. However, based on what Happ, Sanchez, and Estrada have done this year, the Blue Jays have a slight edge in starting pitching.

This is a weakness for both teams, but Toronto’s bullpen wasn’t quite as bad as the Rangers’ during the regular season. Assuming Roberto Osuna is fine after leaving the wild card game with the trainer walking beside him, the Blue Jays will have a dependable closer. Jason Grilli also has plenty of postseason experience, and being able to move Francisco Liriano to the bullpen for the ALDS will benefit the Blue Jays as well.

To be fair, the Texas bullpen started to turn things around late in the year. The return of Tony Barnette and Jeremy Jeffress will give Texas some depth in front of closer Sam Dyson. The Rangers will also benefit from the experience they gained in last year’s postseason. However, it’s difficult to trust a group that struggled so much during the regular season, giving a slight edge to Toronto’s bullpen.

Both teams can hit, and there will be a lot of runs scored in this series, but in the playoffs the edge has to go to the team with better pitching, and in this series that’s the Blue Jays. A lack of big-game experience for guys like Happ and Sanchez is a concern, especially compared to what the Rangers have with Hamels. However, Toronto has better pitchers and a bullpen that’s a little less likely to give away a lead than the Texas bullpen. That edge will allow the Blue Jays to get a little redemption after losing to the Rangers last year, as Toronto moves on to the ALCS.