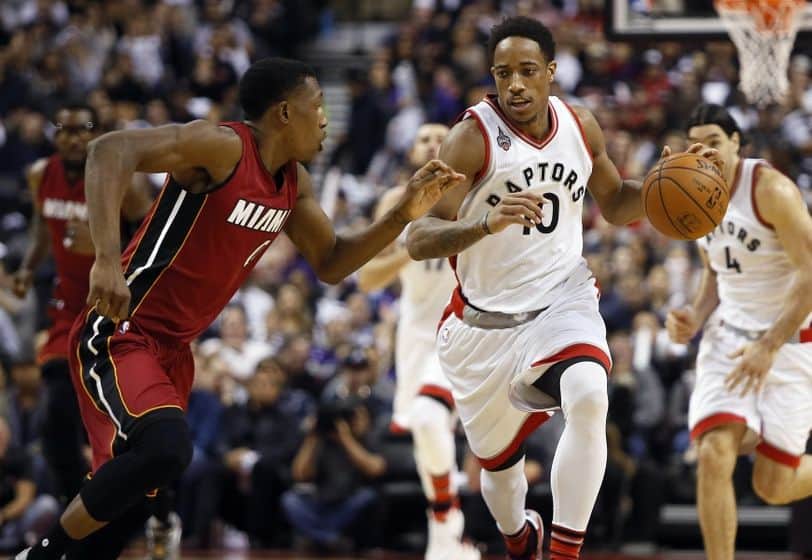 The Miami Heat were hoping they could do it again Sunday. They were hoping they could win their fourth elimination game of the postseason. To do so, they would need to frustrate the Raptors in Toronto like they did back in Miami during Game Six—but it just wasn’t meant to be. The Heat needed Dwyane Wade to have a solid night and for someone else to step up and have a big game. While none of the Heat’s starting five had a bad night–they each scored in double digits–no one stood out above the rest.

While none of the Heat’s starting five had a bad night–they each scored in double digits–no one stood out above the rest. Goran Dragic tried to step up like he did in Game Six but hit only six of 17 shots on the night. He and Wade led the team in scoring with 16 points each.

“With what we had, we fought tooth and nails,” Wade said after the game. “We exhausted all of our possibilities. We did everything we possibly could to try to get there. Hopefully, moving forward, this organization is not snake-bitten like we’ve been the last two years, losing key players.”

The game was relatively close up until the final period. Going into the fourth period, the Raptors held a seven-point advantage, 86-78. Toronto made it clear they were the most deserving team by blowing out the Heat 30-11 in the fourth, making the final score 116-89.

“Their most aggressive, most energetic burst was at the beginning of that fourth quarter, and they put it away,” Heat coach Erik Spoelstra said after the game. “They wore us down.”

The Raptors got what they needed from their stars to make it to the Eastern Conference Finals for the first time in franchise history. Kyle Lowry led the way with 35 points followed by DeMar DeRozan with 28.

Lowry has struggled to find his shot throughout the postseason but was on target Sunday hitting 11-20 from the field including 5-7 from behind the arc.

“Hard work pays off,” Lowry told ESPN.com after the game. “It’s the dedication that I’ve put into this game of basketball for myself and this organization. I just wanted to make sure I could be the best player I could be, at all times — especially on the biggest stage.”

Lowry and DeRozan will get most of the attention being the stars of the team, but the credit should go to the whole starting five—especially Bismack Biyombo. The 23-year old center had one of the best games of his young career with 17 points and 16 rebounds. Patrick Patterson chipped in 11points and 11 rebounds to go with Demarre Carrol’s 14 points and five rebounds.

The Raptors will now have to travel to Cleveland for Game One of the Eastern Conference Finals on Tuesday.