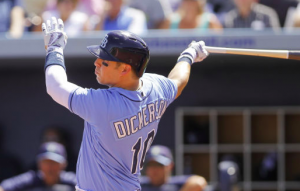 It’s no secret that the Tampa Bay Rays are at the bottom of the totem poll in the AL East heading into the 2017 season. The Rays, of course, are hoping to prove people wrong and find their way to the postseason. But if the Rays are going to make some noise this year, one player who needs to have a big season is left fielder Corey Dickerson. After a winter dedicated to transforming his body, Dickerson says he’s ready to do just that.

Dickerson was traded to the Rays last winter as the centerpiece in a four-player trade that sent pitcher Jake McGee to the Colorado Rockies. As most would have expected, Dickerson’s numbers took a dip in 2016, as he was no longer playing half of his games at Coors Field. In 2014 with the Rockies, Dickerson produced a .931 OPS, and followed that up with an .869 OPS during an injury-plagued 2015. He hit over .300 in both seasons. However, last year with the Rays, Dickerson hit just .243, posting an OPS .761.

That kind of drop off seems somewhat normal considering the hitter-friendly conditions in Colorado, but Dickerson doesn’t think the change of venue was his issue. Instead, he believes his problem was being out of shape. So he took it upon himself this winter to lose some weight. Dickerson will enter spring training 25 pounds lighter than he was a year ago, the lightest he’s been since the Rockies drafted him in 2010.

“I really held myself accountable,” Dickerson explains. “I read a lot of books. I grew a lot mentally over the offseason. I feel like I learned a lot about myself, and that’s where everything really took off.”

In addition to work outs that focused on his flexibility and agility, Dickerson says following a strict diet was the key to his weight loss. “At first, I just cut out deserts and fried foods, the things that are the worst for you,” he says. “When November and December rolled around, I started having only one or two bad meals a week. I grilled chicken and I ate carbohydrates that worked for energy in a good way. Not the stuff you store as fat.”

Even before he gets a chance to test his new body on the field when spring training gets underway later this month, Dickerson is confident he will be a different player this year. “I feel completely different. The way I run, the way I move,” he says. “Now my swing is quicker. The ball comes off the bat better with more range of motion. And the way I throw is different. I think it all benefitted me.”

Of course, there is some uncertainty about where Dickerson will play in 2017. The addition of Colby Rasmus could mean Dickerson will get most of his at bats as a DH. There’s also a chance that Tampa Bay will add a power hitter before the start of the season, which could potentially give him some competition for the DH spot. But he’s not worried about all that right now.

“Hopefully I’ll play out (in left field) every day, but that’s not my decision,” Dickerson said. “I’m going to put my best foot forward to go out there and perform the best way I know how. And let that dictate itself. All I’m worried about is helping the team and bringing what I can bring to the table and be excited about being with my teammates and getting to know the new guys. It’s about winning ballgames and contributing.”

The Rays were probably a little disappointed with what they got out of Dickerson last season, but the 27-year old is poised to enter the prime of his career. His willingness to spend the winter working on his body and trying to get in the best shape possible is a great sign of maturity. It also makes him an intriguing player to watch this spring, as he has the potential to be a difference maker for the Rays in 2017.