Playing college football in the Pac-12 is a great way for high school athletes to develop their game under some great coaches while playing for some excellent programs against fierce competition—but it comes with one problem. The majority of the games are played on the West Coast. So when you kick off at 7 PM local time, it’s 10 PM on the East Coast. At that point in the night, many fans have been watching games since noon and are ready to move on to other weekend pursuits.

Those that stick around their television sets can enjoy something referred to as the “Pac-12: After Dark.” What is that? It’s not a special program of any kind, but what is used to describe the insanity that often occurs during these late games featuring at least one team from the Pac-12.

That was the case Saturday night when Texas Tech traveled to Arizona to face the Arizona State Sun Devils. 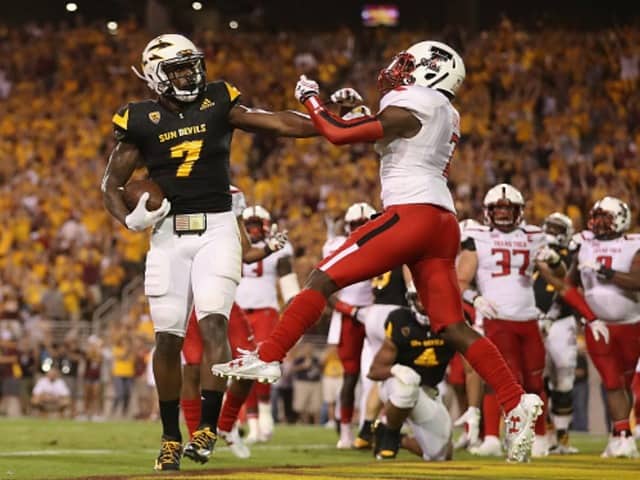 So between the two, there was a ton of potential for fireworks Saturday night and neither team disappointed in what would be a 68-55 win for the Sun Devils.

The junior running back didn’t get his hands on the ball much—just 15 touches (13 carries for 137 yards, seven touchdowns and two receptions for 48 yards and one touchdown)—but he made the most out of his opportunities.  Of the 15 touches he had, he scored touchdowns on eight of them, tying the NCAA record for most touchdowns in a game by one player. With 48 points, he tied the NCAA record for most points by a player in a single game across all divisions.

Arizona State’s 68 was the most scored by a Sun Devils team since 1969.

He was quick to give credit where he felt it was due during an on-field interview following the conclusion of the game:

“It wasn’t me — it was God and my offensive linemen,” Ballage said (ESPN). He took it a step further and took his offensive line to the post-game press conference and even got chairs for each of them while he stood at the podium and answered questions.

“I really don’t care about [the record],” said Ballage (ESPN). “You can ask these guys, and they’ll tell you straight up, I want to win football games, and that’s what this is about. And that’s what we did tonight.

“Scoring eight touchdowns, that wasn’t part of the plan at all.”

He wasn’t the only one that provided fireworks. His quarterback, Manny Wilkins, had a heck of a night as well (28-37, 351 yards, two touchdowns and 55 yards rushing on ten carries). Texas Tech quarterback Patrick Mahomes picked apart the Arizona State defense with ease with by completing 38 of 53 passes with five touchdowns and two interceptions (he added another 44 yards and a touchdown on the ground on 11 carries).

But in what has become typical for the Red Raiders, the defense was almost useless.

Arizona State has another light opponent next week (UTSA) before it kicks off conference play against Cal. Texas Tech will look to get back on the winning side against Louisiana Tech before starting conference play with a visit from Kansas.