They were supposed to lose at least one. With Tom Brady out of the lineup for four games because of that ridiculous Deflate Gate mess, the New England Patriots were expected to lose at least one (Arizona) and possibly two games (Arizona and Houston). The Arizona game was close (23-21) but the Houston game was a blowout—and with the team’s third-string quarterback running the offense (27-0)!

So what the heck happened Sunday against Buffalo? 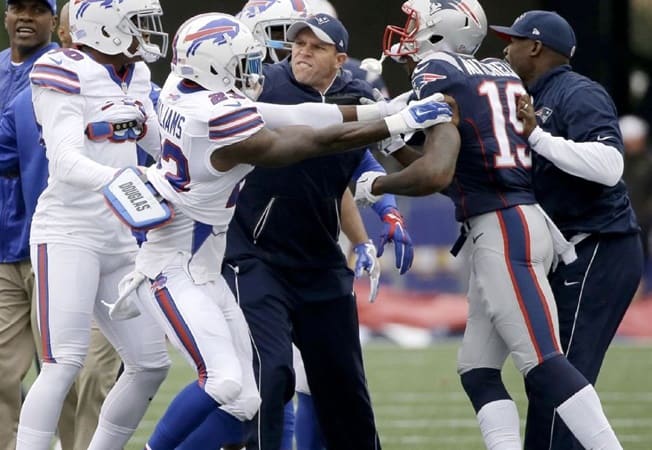 The reason for the outcome of Sunday’s Buffalo-New England game doesn’t matter. Heck—the result barely matters unless you’re a Buffalo fan or a member of the Rex Ryan household.

What happened? Well—the Patriots showed up, but barely went through the motions while the Bills were ready to play and wanted a win.

The fireworks got started before the game did when Patriots quarterback Jacoby Brissett and wide receiver Malcolm Mitchell ran through a drill the Bills defensive backs were engaged in. As could be expected, they didn’t like it—and a little scuffle ensued.

Bills safety Robert Blanton told the media after the game that the Bills defensive backs had already said something to the Patriots about running through their pregame drills, so when Brissett and Mitchell did, the Bills reacted accordingly

It was a short scuffle (15 seconds) that ended up being a prelude to what the game was going to be like. The Patriots were sloppy and ineffective for much of the game. Of their five first-half possessions, New England went three-and-out three times, four-and-out once, and fumbled on the other possession.

Buffalo, on the other hand, had four first-half possessions; scored three times (a touchdown, two field goals) and punted once.

New England’s offense showed signs of life twice in the second half, on their first possession of the half when they got within field goal only to see Stephen Gostkowski miss. They wouldn’t do much again until about midway through the fourth quarter getting as close as the Bills 21-yard line before turning the ball over on downs.

The Patriots defense played better in the second half and held the Bills to just one field goal.

New England also became the first team since the 2006 Dolphins to shut out a team one week and be shut out the next. Miami had shutout the Patriots and was then shut out by the Bills the week after (ESPN).

Rex Ryan was in a good mood during the postgame press conference and made a couple of facetious remarks about the game:

It’s easy to be cocky after a win–but he didn’t stop there. It appears there may be a mole in the New England organization that works for Ryan:

“My sources inside the New England Patriot building said that Jacoby Brissett would be the quarterback,” Ryan said following Sunday’s game (ESPN). “How about that? I’ll stir some stuff up. ‘Who was it?’ Who was it? I don’t know who it was.”