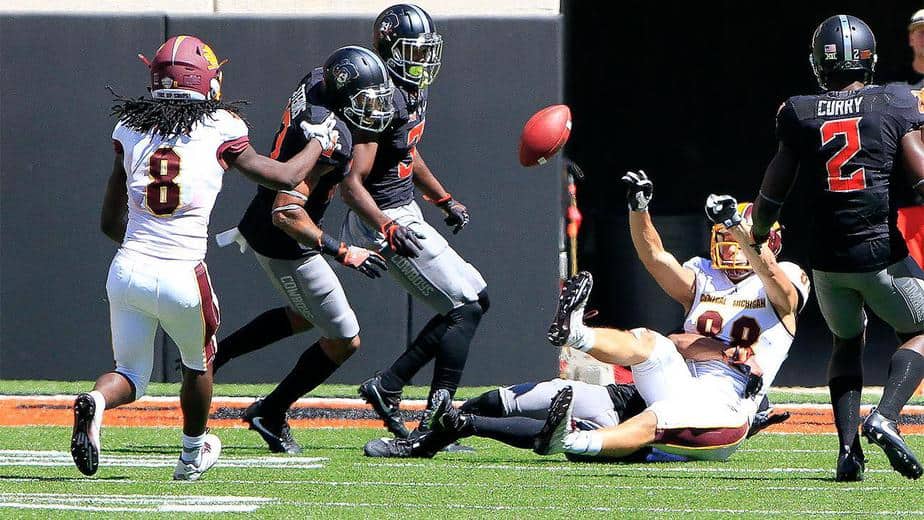 When college football fans tune in to watch the action on Saturdays, they want to do two things—watch their team roll over their opponent with the greatest of ease but otherwise want to see a good game. However, when there isn’t a single game featuring ranked opponents, there isn’t a whole lot of hope for quality football.

Of course, when that happens, there is always at least one game featuring a team—like the No. 22 Oklahoma State Cowboys–that takes the week off mentally or faces what they thought would be a lesser opponent—like Central Michigan–that ends up being pretty good.

It just matters that a mistake by the refs gave Central Michigan one more play after the game had ended.

The refs called intentional grounding on Oklahoma State quarterback Mason Rudolph for heaving the ball out of bounds as the final four seconds ticked off the clock. There was no attempt to throw it to a receiver. There wasn’t a single player even running a route. The whole plan was just to kill the clock and walk away with a 27-24 win.

“I never really thought of intentional grounding being called at that time in the game,” Gundy said afterward (ESPN). “We talked about it for about 20 seconds there at the end, for him to get the ball and just throw it out of bounds.”

The refs threw a flag on the play and called intentional grounding on the Cowboys. While the game should have ended, the refs decided to award Central Michigan one final play after time had expired.

According to the rules, intentional grounding results in a loss of down, which, if there were time for another down, would mean the ball would have belonged to Central Michigan. By the rules, a game can’t end on a live-ball penalty that is accepted—which must be why the refs decided Central Michigan would get one more play.

However, the rule book allows the game to end on an offensive penalty.

“There’s an exception to the rule that says if enforcement of the foul involves a loss of down, then that brings the game to an end,” referee Tim O’Dey of the Mid-American Conference told a reporter after the game (ESPN).

Technically, the game ended when Mason Rudolph chucked the ball out of bounds meaning the epic Hail Mary-lateral play the Chippewas scored on to win it should not count—but it is. Once the game is officially over, a play cannot be overturned, and the outcome cannot be changed.

So with a little help from the officials, the Chippewas beat a ranked opponent for the first time since 1991, ending a streak of 13-losses to ranked opponents. Yeah–Oklahoma State should have won, but as far as the official record is concerned, they didn’t.