But then the Eagles went and traded away their starting quarterback and inserted their rookie quarterback—Carson Wentz–who missed almost the entire preseason with an injury–and the game became interesting. 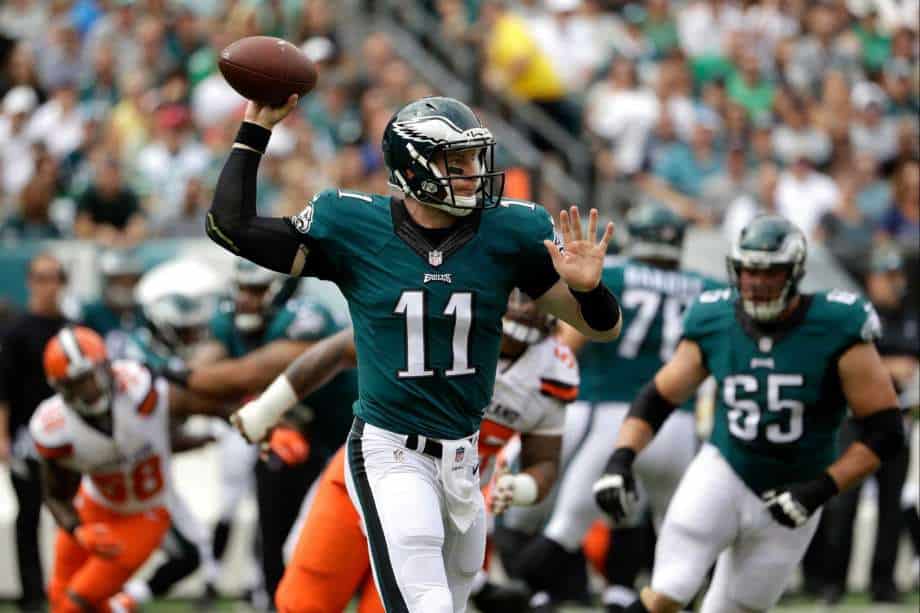 The move was a bit of a surprise since the Eagles had claimed Wentz was going to be inactive and needed work on his fundamentals before he would be ready to play. When he missed the majority of the preseason with a rib injury, he suffered during the first game of the preseason it seemed almost foolish even to consider inserting him into a game let alone starting him. But the Eagles suddenly decided he was ready.

He no longer needed time to work on his mechanics or anything else like they had said before—he made all the improvement he needed just by watching practice.

Somehow the Eagles expected us to fall for their logic, but after watching him play against the Browns Sunday afternoon—well, they might not be entirely wrong.

Philadelphia got the ball to start the game, and Wentz proceeded to march the team right down the field for a touchdown, a beautiful 19-yard pass to Jordan Matthews. On the drive, Wentz completed four of five passes on the drive for 57 yards and looked nothing like an FCS quarterback who had been out for the last few weeks. While he was far from perfect, he ended up having a pretty decent day (22-37, 278 yards, two touchdowns) en route to a 29-10 win over the Cleveland Browns (who lost their 12th straight season opener).

“It’s not surprising,” Eagles head coach Doug Pederson said after the 29-10 victory. “This is who he is. This is his DNA. … He prepared like he was a five-, six-year veteran, and obviously he played that way.”

As easy as it is to get excited over the win and how Wentz played, it is important to keep in mind who the Eagles were playing—the Browns are terrible. In the first quarter, the Browns failed to make a single first down and gained only thirteen yards on eight plays. It actually took 17 minutes of game time for the Browns to get a first down. Then there was the fake punt that had to have been the worst fake punt attempt in recent history (it didn’t come close to working).

In spite of their struggles, the Browns were still in the game at the end of the first half; they were down just 13-7. Cleveland got the ball to start the second half and closed the gap to 13-10 after a 58-yard bomb to rookie Corey Coleman got the Browns into field goal range—but that would be as close as they would get.

On their next drive, the Browns would give up a safety making the score 15-10. Wentz engineered his second touchdown drive of the day on their next possession to stretch the lead out to 22-10.

The two teams would trade punts for the rest of the game with neither generating much offense until late in the fourth when the Browns decided to go for it on fourth and three from the 15-yard line. The conversion attempt failed.

Five plays later, a one-yard dash by Ryan Mathews made the score 29-10.

After the game, several players spoke glowingly of the Eagles new quarterback, but a look at what he actually produced against a dreadful Browns team shows just how far he has to go. Three times the offense was given a short field by the defense and special teams, but they only managed a pair of field goals.

Of the Eagles six drives in the second half, they scored twice, but one of those scores only required the Eagles to gain 15-yards.

So yes—Carson Wentz looked pretty decent against a bad team, and the Chicago Bears are not going to be much tougher next week. But when the Pittsburgh Steelers come to town in Week Three it could get ugly.

As for Robert Griffin III, he suffered a shoulder sprain after taking a hard hit in the fourth quarter with the team down by 12 and less than four minutes on the clock. He says he’s fine and will be ready when the Browns take on the Baltimore Ravens next week.