In spite of how lost and confused Jared Goff looked during the preseason, many people couldn’t understand why Rams head coach Jeff Fisher wasn’t starting him (or at least dressing him). After the way Case Keenum played, the calls for Goff are going to become even louder. 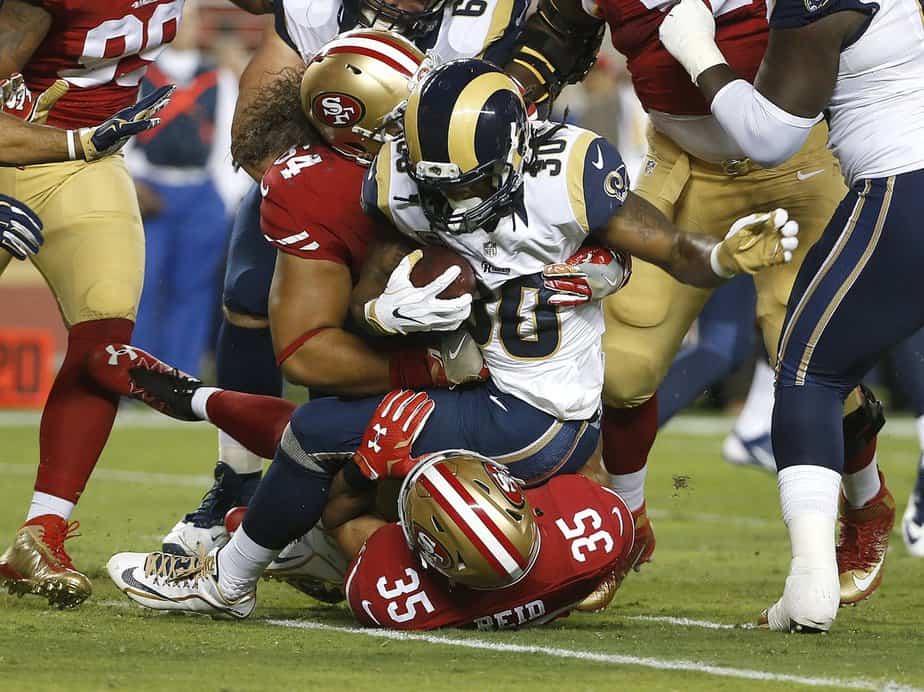 Keenum completed just 17 of 35 passes on the night for just 130 yards and was intercepted twice in a dismal 28-0 loss to the San Francisco 49ers.

“I’ll take the blame,” Keenum said after the game. “This team deserves better play from their quarterback.”

To be fair to him, he didn’t receive much help from anyone on the team. Todd Gurley managed only 47 yards on 17 carries, and the offense line looked extremely overwhelmed by the 49ers front seven.

The defense didn’t help much either. Last year’s No. 10 defense hardly put any pressure on Blaine Gabbert, failed to record a single sack, and helped look like the next great dual-threat quarterback (22-35 for 170 yards and a touchdown; nine carries for 43 yards).

It certainly didn’t help in the fourth quarter when Aaron Donald as ejected for making contact with an official. The contact came after he grabbed 49ers wide receiver Quinton Patton by the neck and knocked his helmet off.

“I let the emotions get the best of me,” Donald said, via the Los Angeles Daily News. “I’m going to have to pay for my actions. But any time you lose like that you’re going to be embarrassed. On that play, I just saw something happened, and I thought I would stand up for my guys, and it was a dumb decision to do it the way I did it.”

Many expected Fisher to be open to benching Keenum and inserting Goff, but unlike the media and fans calling for Goff, Fisher remembers how poor Goff looked in the preseason. He did say that Goff will dress next week, and Sean Mannion will sit, but he is not ready to give up on Keenum just yet.

“I thought about it [pulling Keenum for Mannion]. I just wanted Case to finish it…I would have done the same had Jared been (No.) 2,” Fisher told reporters after the game. “I would have let Case finish it. This doesn’t change anything as far as quarterback is concerned.”

With a solid performance, Gabbert will quiet the critics at least until game time next Sunday. However, if he doesn’t start sliding more or make more of an effort to not get hit, he may lose his position to Colin Kaepernick–just like Alex Smith did (because of an injury). He might start mixing up his name like ESPN did.

Gabbert will certainly face a much tougher defense next week when his team travels to Charlotte to play the Carolina Panthers.

As for the Case Keenum and the Rams, they will have the tough task of trying to rebound from their dismal performance against the 49ers by taking on the Seattle Seahawks. The Rams did beat the Seahawks twice last season and once with Keenum behind center.