There was not much reason to hope the Minnesota Vikings would be able to beat the Carolina Panthers Sunday. Yes, the Minnesota defense is not bad, but the Panthers have one of the best offenses in the NFL. Carolina also has a pretty good defense that many believed would not have much trouble stopping the one-dimension Minnesota offense.

On paper, it looked like the game was working right into the hands of the Panthers in the first half. The Vikings offense did as little as most expected they would do against the Carolina defense. Three of their drives were three and outs, and they generated less than 40-yards of offense in the half. That meant the poor defense was on the field for most of the half (about 20 minutes). 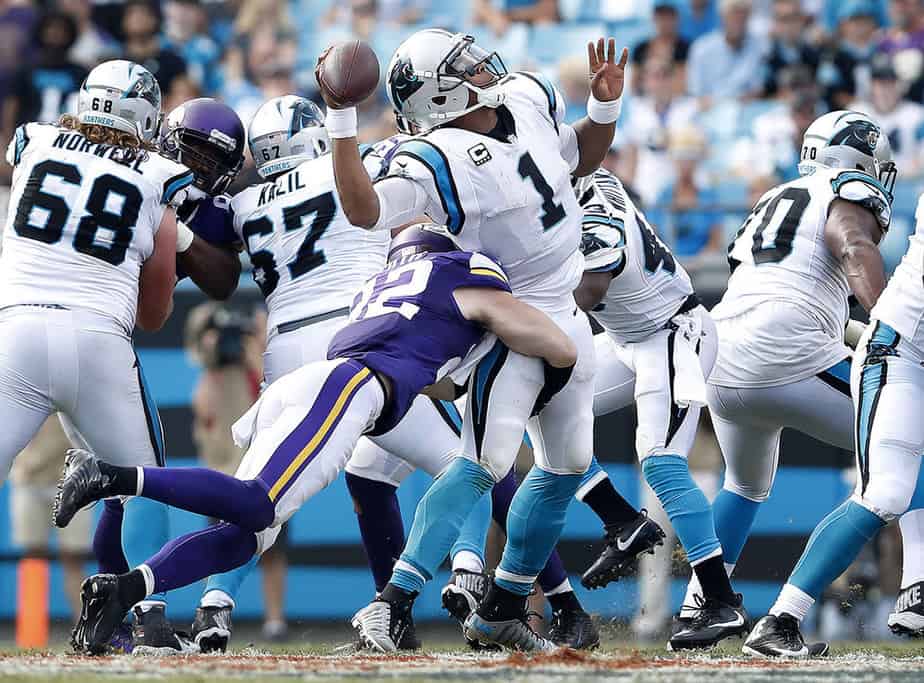 Somehow the score was only 10-8, Panthers.

Carolina moved the ball pretty well throughout the half scoring a field goal on their first drive and a touchdown on their second—but everything changed on their third drive.

But then Danielle Hunter recorded the first Vikings safety since 2011 on the next play.

That’s only two points, though. The Vikings still couldn’t move the ball for the rest of the half. So how do we know the game turned on the third drive of the game? Because Cam Newton told us it did:

“[We were] running the football extremely well, keeping them off balance, and then all of a sudden, you know, after the safety it was good riddance,” Newton said.

Wow. It was still the first quarter.

Carolina had three first downs on their next drive but sputtered the rest of the way missing a field goal on one and ending another with an interception. A punt return for a touchdown by the Vikings made the score appear much more competitive than the game was at that point.

But then everything changed at halftime.

In the second half, Sam Bradford started seeing some success throwing quick, short passes. With not much of a running game, it was the only way they could get the Panthers defense to back off—and it worked. Bradford was only pressured on 11.8 percent of his pass attempts in the second half and completed 14 of them (attempted 17) (ESPN).

As tired as they had to be after the first half, the Minnesota defense turned the pressure up on Cam Newton in the second half. They were in his face early and often, and often got in in a hit if they didn’t sack him. When the day was done, the defense sacked Newton eight times (five in the second half), pressured him on 17 plays, and intercepted him three times.

After allowing Carolina to gain over 200 yards of offense in the first half, they held the Panthers to under 100 in the second half, most of which came in the last five minutes of the game.

Carolina committed ten penalties that cost them 65 yards on the day; one of them resulted in a 56-yard touchdown run by Fozzy Whitaker being called back.

The Vikings will win a lot of games with their defense and Bradford making the most of the short passing game, but to win in the postseason, they will have to figure out how to develop a running game without Adrian Peterson. They had 58 against Carolina and have gained just 153 total yards on the ground this season.

They will not find the New York Giants defense easy to run on next week when they come to town.

As for the Panthers, they will have a few softer opponents to work through some of the kinks before facing a serious challenge. Next up will be a trip to Atlanta followed by a visit from the Buccaneers and a trip to New Orleans.

Barring any more mental let downs, Carolina should be able to win all three and be 4-2 when the Arizona Cardinals come to town at the end of October.