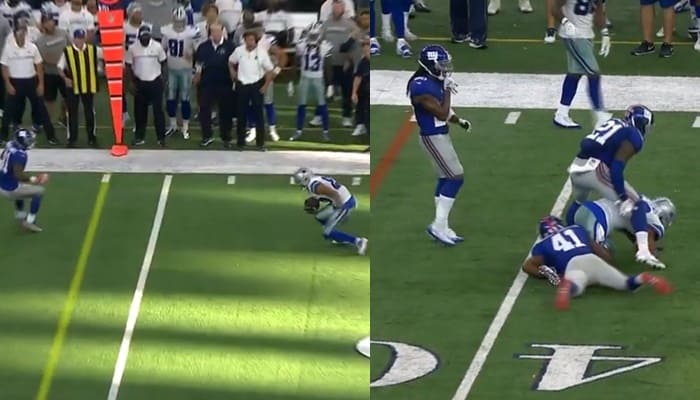 Fans of the Dallas Cowboys had a few things to look forward to before kickoff Sunday against the New York Giants. For one, they would finally be able to put the memory of last season to bed with a win over the hated Giants. They could finally see if rookie Dak Prescott was going to live up to his preseason hype.

If he did, their team could do something it hadn’t done much of since 2006—win without Tony Romo. There was just one problem, and no, it’s not Terrance Williams. Much like last season, the defense—especially the front seven—is terrible.

To be fair, the defense was not horrible for the entire game. After falling behind 13-9 at the half, the defense started the second half with an interception that led to Ezekiel Elliot’s first touchdown, a nice eight-yard run.

On New York’s next three drives, the Dallas defense held the Giants to 40-yards on 14 plays. They struggled to put pressure on Manning, but as a unit, they did enough to keep the Giants offense in check—until the fourth quarter, that is.

Much like last season’s defense, the Dallas defense turned into a sieve when the game was on the line. With next to no pass rush, Eli Manning had little trouble picking the Cowboys secondary apart until he hit Victor Cruz in the end zone with a three-yard pass to take the lead.

For Cruz, it was a moment that took too long to come; it had been around 700 days since he last played.

“Doing the dance, it’s in the blood, so it doesn’t go anywhere,” Cruz said via the Giants website. “It’s just like riding a bike. It was good to get in there. It was good to be able to score for my team. It felt good.”

The defense had another chance to come through for the team when the Giants got the ball back with 3:57 on the clock. Instead, they let the Giants running game smash their way to two first downs before finally shutting it down.

But at that point, there was only 72 seconds on the clock and with the ball on the 20-yard line and no timeouts it was looking bleak at best.

Prescott nearly pulled it out, but the team didn’t get a chance to attempt a last second field goal when Terrance Williams cut back inside and was tackled rather than get out of bounds.

“It’s still a poor decision for me,” Williams said. “It’s one of those things that just happened at a bang-bang moment. Just looking back, I’ll never do it again.”

In fairness to Williams, the kick would have been a 58-yarder and a new personal best for Cowboys kicker Dan Bailey—who had made his personal best earlier in the game from 56-yards out. A 58-yard attempt would not have been a sure thing.

But when you have the most accurate kicker in the league on your roster, it would have been nice to have been able to try.

Overall, it was a good debut for the first rookie tandem to start at running back and quarterback for the Dallas Cowboys since Roger Staubach and Calvin Hill back in 1969. Elliot only had 51 yards on 20 carries but did score his first touchdown on a nice eight-yard run. Prescott (25-45, 227 yards, no sacks) looked calm and cool under pressure, but did appear to rely a lot on shorter passes to Jason Witten and Cole Beasley (they had 26 of Prescott’s 45 attempts thrown their way). In the second half, he went through a stretch where he threw a lot of passes high.

But in the end, he gave the team a chance when they needed him most.