Even though it is only Week Two of the 2016 NFL season, Thursday night’s game between the New York Jets and the Buffalo Bills was an important one. Teams rarely recover from 0-2 starts to the season and still make the playoffs. Since 2009 only four teams have started 0-2 and made the playoffs—the Carolina Panthers in 2013, Indianapolis Colts in 2014, and the Houston Texans and Seattle Seahawks last season.

Since 1990, there have only been 25 teams that managed to start 0-2 and still make the playoffs—so while not impossible, it is improbable. 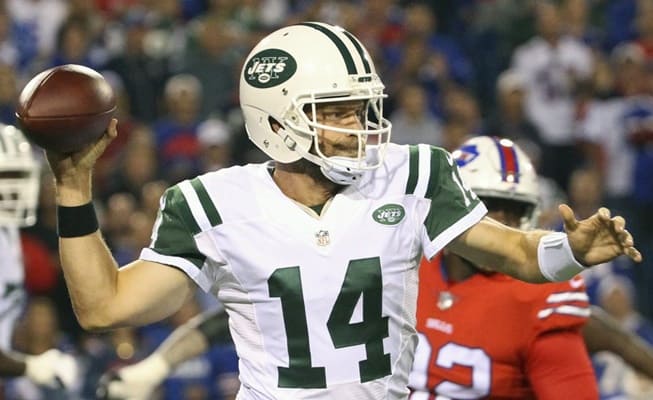 It has been no secret that Buffalo Bills head coach Rex Ryan is on the hot seat this season and will likely lose his job if the Bills do not make the postseason. So after losing to the New York Jets 37-31 Thursday night, the future does not look good for Ryan.

Historically, Rex Ryan-coached defenses have had Ryan Fitzpatrick’s number, but not this time. Fitzpatrick picked apart the Bills defense with relative ease completing 24 of 34 passes for 374 yards and a touchdown. The Jets scored on seven of their first nine possessions of the game and the team nearly had three 100-yard receivers (Brandon Marshall—101, Eric Decker—126, and Quincy Enunwa—92).

Matt Forte looked like the stud running back Bears fans know and love with 100 yards and three touchdowns on the ground.

“Their offense against our defense looked like a mismatch,” said Ryan (USAToday). “(Fitzpatrick) was hot and they were making plays. We couldn’t do anything to disrupt them. I was afraid to pressure them because I was afraid we wouldn’t hold up. We did everything, but to their credit, it never mattered what we played because they were the better team. Brandon Marshall told me he was going to kick my butt today, and he was right, he did.”

The win nearly came at a steep price. Jets fans feared they were going to lose wide receiver Brandon Marshall to a knee injury. He ended up returning but admitted after the game that he thought he was done.

“I thought it was over,” Marshall said. “I thought I’d be fishing in my backyard in Florida.”

For a brief moment in the third quarter, it looked like the Bills were going to be able to pull out a win even though their defense had no answer for Ryan Fitzpatrick. After opening the half with a quick, three-play touchdown drive, they recovered a Jets fumble on the ensuing drive and took a 24-20 lead.

It ended up being short-lived. After each team had a three and out, the Jets marched down the field with a nice 12-play drive that ended with Matt Forte putting the Jets back on top for good. Buffalo would add another touchdown in the fourth quarter, but it was too little too late at that point.

The road ahead will not get any easier for the Jets. Next up, they have the Kansas City Chiefs followed by the Seattle Seahawks, Pittsburgh Steelers, and Arizona Cardinals.

Buffalo will look to rebound against the Arizona Cardinals next week, and it will do so with a new offensive coordinator at the helm. Greg Roman was fired Friday morning and replaced by running backs coach Anthony Lynn.