Love. All we need is love. There’s that song that says it, but if you need to hear it from someone other than the Beatles—well, take it from the head coach of the Alabama Crimson Tide.

Before sending his team out to take on the No. 19 Ole Miss Rebels, he spoke to his team about the importance of love: “You’ll have burdens in this game, and you’ll have to overcome it. If you really love it, we’ll overcome whatever we have to.” 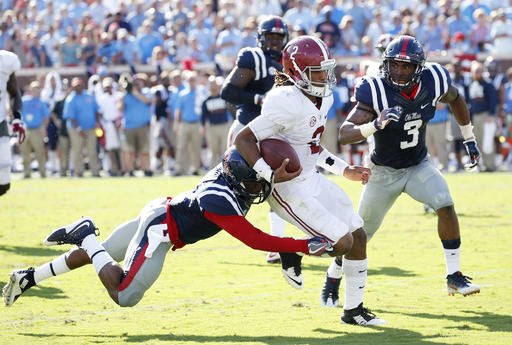 When it comes to Ole Miss, Alabama has had a lot to overcome. The last two times Alabama and Ole Miss played, the Rebels walked away from the game victors. With a win in Saturday’s game, Ole Miss could do something no one believed possible—beat a Nick Saban-led Alabama team three times in a row.

For the better part of the first half, it appeared as if Ole Miss was going to take down the mighty Crimson Tide. When Alabama quarterback Jalen Hurts was sacked by Marquis Haynes and fumbled the ball, John Youngblood promptly picked up the ball and ran it into the end zone. With the extra point, Ole Miss appeared to have a commanding 24-3 lead.

Was it going to happen again? Could someone have Nick Saban’s number? Of course not.

If there is one thing that can be said for a Nick Saban team, it is that they never believe they are out of a game until it’s over. So if there is time on the clock, they are going to be doing everything they can to mount a comeback. They may not always do it, but they are not going to let an opponent sit on a lead—ever.

It took Alabama three plays to cut the gap down to 24-10. Before the end of the first half, a punt returned for a touchdown would cut it down even more (24-17).

With the first possession of the second half, the Crimson Tide managed a first down but had to punt—which ended up being a good thing. Ryan Anderson sacked Chad Kelly a couple of plays later, forcing Kelly to fumble the ball which Da’Ron Payne would recover for a touchdown.

Alabama would continue to dominate in the second half, and would take a 48-30 lead with five and a half minutes to play. At that point, you would think the game had to be done—right? But then an Ole Miss touchdown makes it 48-37.  An onside kick recovery and a 37-yard run later and the score is 48-43 with 2:51 left in the game.

Alabama mounted a comeback earlier in the game. Why not one by Ole Miss at the end?

While it would have made for an epic finish—it just wasn’t meant to be. Ole Miss struggled all day to stop the Alabama running game, so the Crimson Tide killed the rest of the clock and the potential comeback with a few good runs.

The 21-point deficit was the largest that Alabama has covered since 1989 when they fell behind Ole Miss early, 21-0, before going on to win 62-27. With 146 yards on the ground, Jalen Hurts became the first Alabama quarterback to run for 100-yards.

Saban summed it up well after the game:

“It was an unbelievable game for fans to watch. It was really a difficult game for an old coach to have to suffer through. But we made it. We made it, and I’m really proud of our players.”

Ole Miss head coach Hugh Freeze will have his work cut out for him moving forward.  His team became the only Power Five team in the last decade to give up 21+ point leads twice in the same season.

“We scored enough points to beat an Alabama team,” Ole Miss coach Hugh Freeze said. “But we did not stop the run, and we did not take care of the ball.”

They will certainly need to do a better job of stopping the run next week when they face off against the Georgia Bulldogs and Nick Chubb. Alabama has an easy one up next against Kent State.