Recap: No. 11 Texas At California—Longhorns Still A Work In Progress

When the Texas Longhorns beat the Fighting Irish of Notre Dame in a double overtime thriller, 50-47, the media was ready, willing, and all too eager to say the Longhorns were back. To be fair, they did deserve a fair amount of attention for scoring 50 points and taking down a top 10 team—but from unranked to No. 11 in the AP Poll?

That was just a little much. 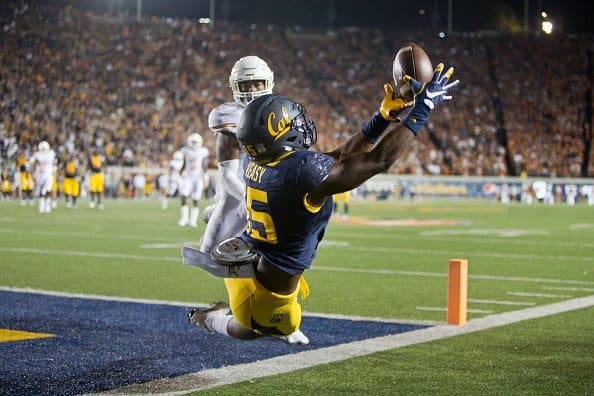 The Coaches Poll was a bit more realistic (No. 20). UTEP didn’t provide much in the way of competition in their second game, but Cal—even though they were replacing their starting quarterback (Jared Goff)—they had a former student from the Kliff Kingsbury School of Gunslinging, Davis Webb.

Texas would need to keep Webb off the field as much as possible while mixing in enough of a passing game to keep Cal from focusing on the run—and they did a great job of doing just that.

Shane Buechele had to leave the game in the first half to be evaluated for a possible injury but returned and completed 19 of 33 passes for 196 yards, one touchdown, and one interception. The running game did what it needed to against a weak Cal run defense with 307 total yards (D’Onta Foreman, 21 carries, 157 yards and two touchdowns; Chris Warren III, 18 carries, 119 yards and two touchdowns).

When your offense generates 568 yards and 43 points, it should win, but the defense failed to hold up its end by allowing Cal to generate over 500 as well. Webb picked apart the Texas secondary with ease (27-40, 396 yards, four touchdowns) and Vic Enwere had little trouble finding room to run (18 carries 110 yards and two touchdowns).

Both offenses exploded in the first half which saw Cal take a 35-33 lead into the half. It looked like both teams could hit 70 before the game ended, and the winner would be the team to get the ball last. But both defenses stiffened up in the third quarter and didn’t allow a single point.

In the end, it was the team that had the ball last that won, but Cal did its best to give Texas another chance. With a 50-43 lead, Vic Enwere appeared to ice the game with a 55-yard touchdown run, but he celebrated a moment early and dropped the ball at the one-yard line. Players from both teams ran by the ball before Texas safety Dylan Haines picked it up and handed it to the ref.

The replay showed it was indeed a fumble, but since no one tried to recover it in a timely fashion, Cal was allowed to keep the ball.

“The ruling on the field was a touchdown, which replay determined that there was a fumble at the 1-yard line,” Big 12 referee Mike Defee said. “The ball rolled into the end zone, came to rest, Cal players ran past it, and many Texas players ran past it. I think it was 14 [Haines] that picked up the ball and handed the ball to the official.”

“He [the replay official] was ruling that there was a time element there that constituted no immediate recovery,” Defee said. “Therefore, by rule, the ball goes back to the team that was last in possession at the 1-yard line.”

Maybe if Texas was given possession, since one of the Longhorns did eventually pick the ball and hand it to the ref, the game could have ended differently. However, they would have had around a minute and a half to go 80-yards so even if they had another shot chances are, they still would have lost.

Texas will have another high-powered offense to contend with in two weeks when they play Oklahoma State. The Cowboys quarterback lit up the Pitt defense for 540 yards and a pair of touchdowns Saturday. Cal will try to keep the good times rolling next week when they open conference play against a good Arizona State squad.