Recap: No. 12 Georgia Bulldogs vs. No. 23 Ole Miss Rebels—Don’t Count Ole Miss Out Of The Playoff Picture Yet

Had Ole Miss beaten Florida State and Alabama the college football-loving free world would be in love with Chad Kelly and the Rebels—but they didn’t. Instead, Georgia coughed up two 21-point leads in epic fashion and went into Saturday’s game against Georgia with a losing record and on the verge of being booted out of the top 25 and 0-2 in conference play.

So if Georgia head coach Kirby Smart told his team at halftime “Don’t worry,” and “We’re still in it,” he probably meant it. With how the Rebels had given up huge leads already this season there was no reason for him to think his team was out of it even though they were down 31-0. 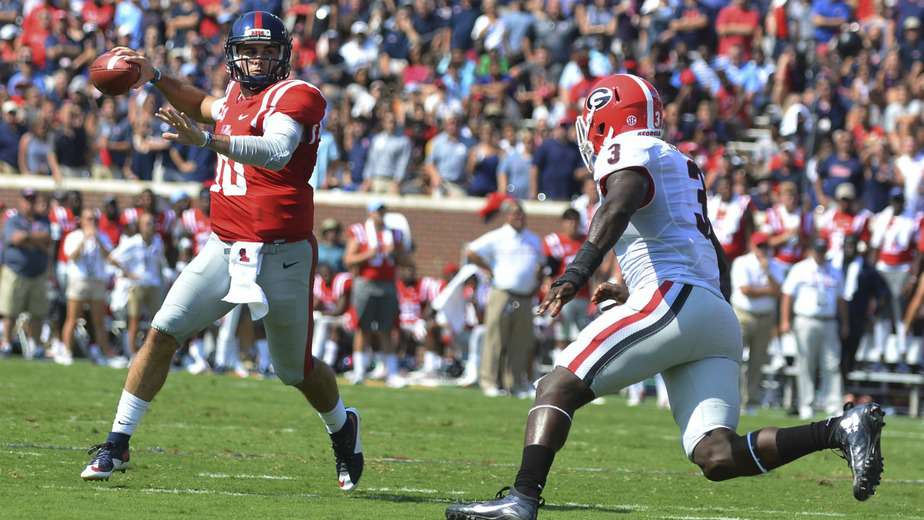 Yes, 31-0. Ole Miss got it started with a field goal on their first drive of the game. Followed it up with an interception returned for a touchdown on Georgia’s next possession. Before the first quarter would end, the Rebels would drive the ball 84-yards in ten plays for another touchdown and a 17-poiny lead.

But could they keep it up? Against Alabama and Florida State, they failed to keep the pressure on, lost a sizable lead, and went on to lose both games.

“We went up 17-0, and I got really excited, really hyped,” the Ole Miss tight end Evan Engram told the media after the game. “Then I was like, ‘keep composure, keep composure.’ I was on the sidelines like, ‘We’ve been here before. Let’s finish.’”

Finish they did. They kept the pedal down throughout the second quarter and ended up taking a 31-0 lead into the half. But as Ole Miss fans know all too well, big leads at the half mean little to their team. Fans had to worry–would this week be more of the same?

Starting the second half with a touchdown drive had to help ease the nerves, but it probably helped even more when the defense shut the Georgia offense down on its first two drives of the half. If that wasn’t enough, Chad Kelly’s 41-yard touchdown run that made the score 45-0 must have done the trick.

Georgia would score a pair of touchdowns in garbage time to make the final 45-14.

It wasn’t surprising to see Ole Miss play so well on offense, but it was a little shocking for Georgia’s offense play so poorly. Bulldogs quarterback Jacob Eason did not look like a freshman in the first three games of the season, but against the Ole Miss defense, he looked like he should have been leading the scout team rather than the first team (16-36 for 136 yards and an interception).

It didn’t help that he lost his best running back, Nick Chubb, in the second half. Chubb had an injured his ankle during the second quarter. It was eventually announced that he had an ankle sprain.

The Bulldogs still managed to gain 230 yards on the ground. But when a team is up as much as Ole Miss was for the majority of the game, they are not going to care if an opponent wants to grind away at the clock with a running game.

“You never believe you are going to play like that. I think that we did not respond well when they had success. Yet every other game so far, we have responded. We did not get away with some things defensively that we had in the past. They made the plays down the field when they had to,” Smart said after the game.

For the Rebels, it ended up being the school’s largest margin of victory over a top-25 team since a 38-0 win over Tennessee in 1969. It also brought an end to a 10-game losing streak to the Bulldogs that dated back to 1996.

The win also keeps the Ole Miss hopes of making the SEC title game and the CFB playoffs alive. At 1-3 overall and 0-2 in conference play the Rebels title hopes (national and conference) would have been dashed. At 2-2 (and 1-1) the Rebels are still in the hunt, but have to win out and receiver a lot of help to make the CFB playoffs (or conference championship).

As for their conference title hopes, no one is going to be a push over. Arkansas is their next conference foe in a couple of weeks, and they have tough ones to look forward to against LSU, Auburn, and Texas A&M.