Recap: No. 18 Georgia vs. No. 22 North Carolina—Remember Me Heisman Voters? My name is Nick Chubb.

College football fans were introduced to Nick Chubb back in 2014 when then starting running back, and Heisman favorite, Todd Gurley was suspended for a few games for taking money to autograph a few things (and eventually lost for the season due to an injury). He went on to run for 100+ yards in eight straight games to end the ’14 season.

After watching him rack up over 1500 yards in 2014, Georgia fans were excited to see what he could do as the full-time featured back in 2015—but then he was lost to a season-ending knee injury in early October.  Ask anyone that saw a clip of the play and the look on their face would tell you how bad it was. But much like the six-million-dollar man, the doctors had the technology to rebuild him (or at least his knee). 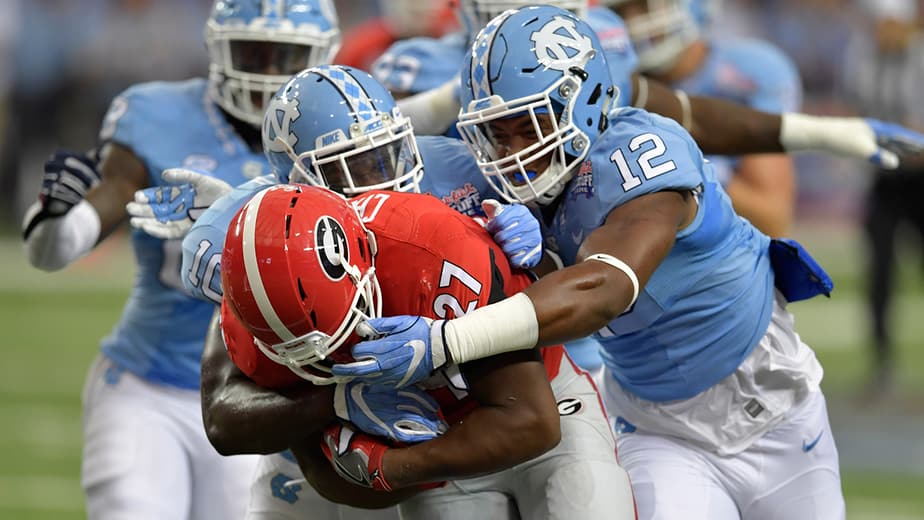 So they did–and now he’s back.

Chubb made his return Saturday in No. 18 Georgia’s season opener against the No. 22 North Carolina Tar Heels. Rather than open the season with a soft opponent like most big schools, the Bulldogs were looking to make a statement with an early win over a quality team.

The team ended up with a win in the end, 33-24, but the statement was not made by the team. Chubb made it.

First-year head coach Kirby Smart was far from perfect in his debut, but he showed he has the guts to pull the trigger when his quarterback is not getting the job done. Greyson Lambert started the game but was replaced by freshman Jacob Eason.

Eason was far from perfect as well, but he had a running back looking to remind the world how awesome he is helping him out. Smart probably would not have minded testing the new knee of his star running back a little less, but Chubb appeared to be handling contact well.

“I felt good the whole game,” Chubb said after the game. “Give me the ball. I know we have a great team.”

By the time the game was done he carried the ball 32 times for 222 yards and a pair of touchdowns. His second touchdown came at the end of a nice 55-yard run with 3:34 left in the game that put the Bulldogs up by nine.

How’s that for a Heisman statement?

After completing eight of 12 passes for 131 yards and a touchdown, it would appear as if Eason would be the starting quarterback going forward. Lambert, a fifth-year senior, was only five of eight for 54 yards and was sacked three times.

Smart does not sound like he is going to pull the trigger on Lambert just yet (ESPN):

“There is no plan right now,” said Smart, who didn’t name a starter until two days before the game. “I’m sure all you guys (in the media) will want to know who’s going to start the next game, and we’ll start it all over again.”

Nicholls State, Georgia’s next opponent, is probably not too worried who the quarterback will be. They’ll be more worried about slowing down Chubb.