Recap: No. 19 Florida Gators vs. No. 14 Tennessee Volunteers—Maybe These Volunteers Are Legit After All

There were high expectations for the Tennessee Volunteers this year. With six wins to close out the 2015 season and a lot of veteran talent coming back, many believed this could be the year for the Volunteers. But then they played a game.

After a poor showing against Appalachian State, a lot of people jumped off the pro-Tennesee bandwagon. They assumed it was going to be another disappointing season for Volunteers after their team had to go to overtime to beat Appalachian State. A 21-point win over Virginia Tech got a few critics to quiet down, but then a nine-point win over an Ohio team the Volunteers were favored to beat by 28-points brought them all back. 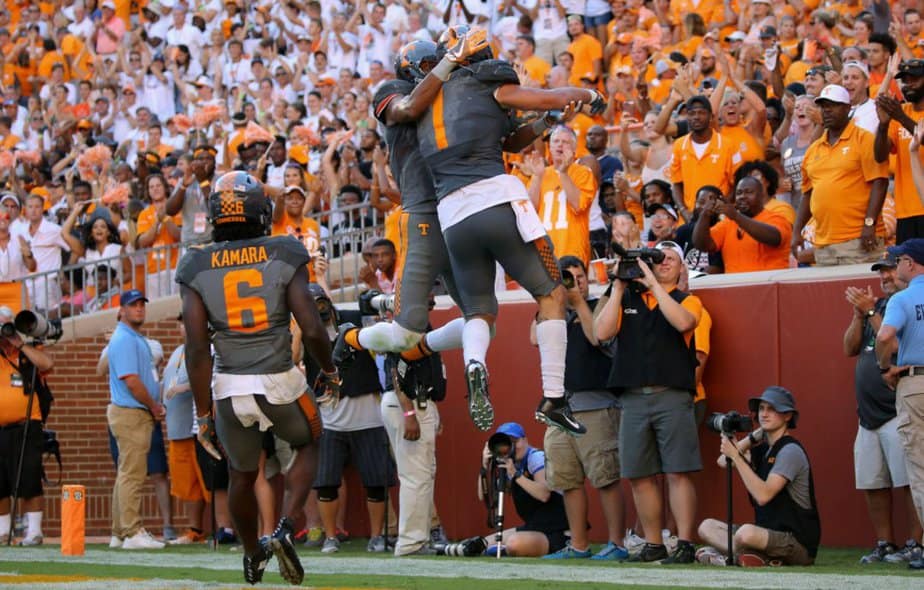 When they fell behind Florida 21-3 in the first half Saturday, it looked like it was going to be one of those days—and there was no reason to think it was going to get better. Florida was playing with its second-string quarterback but didn’t have much trouble moving the ball.

Tennessee, on the other hand, couldn’t get much going. It didn’t seem to matter where Joshua Dobbs hit his receivers—they were going to drop the ball.

In short—nothing was working right for the Volunteers much like it hadn’t the last 11 times they had faced off against the Florida Gators.

But then suddenly things started to work right. After getting dominated during the first half, the Volunteers flipped the script in the second half. As cliché as it sounds, the game became a tale of two halves.

Florida certainly didn’t keep playing. After getting at least one first down on every drive in the first half, forcing two turnovers, a turnover on downs, and allowing only three points, the Gators simply fell apart in the second half. The offense didn’t get a first down until the fourth quarter was almost half over (five three and out drives and one turnover).

That first down didn’t come until after the Volunteers had scored 38 unanswered points and taken a 38-21 lead.

“They came in and took it to us,” Florida coach Jim McElwain said. “It’s disappointing. We’ve got a bunch of guys hurting in the locker room. … These are life lessons. Not every day does everything go just like you wanted. I think the key is what you learn from it and how you’re going to respond.”

Florida did play without its starting quarterback, Luke Del Rio, who had injured his knee against North Texas last week. Senior Austin Appleby, a transfer student from Purdue, got the nod and looked up to the task in the first half, but couldn’t spark the offense in the second.

Tennessee quarterback Joshua Dobbs couldn’t do much right in the first half (7-20, 84 yards, one interception), but could do no wrong in the second half (9-12, 235 yards, four touchdowns, one interception). Dobbs tacked on another 80 yards and a touchdown on the ground as well.

Florida defensive back Quincy Wilson had tried to get cute earlier in the week by comparing the Volunteers to ducks and the Gators to trucks:

“Nobody has ever seen a duck pull a truck. Florida Gators are going to win, simple as that. That’s it on that. Any other questions?”

Apparently, ducks are a lot stronger than Wilson thought. He may want to be careful before he talks trash about LSU in a couple of weeks, but probably has nothing to worry about next week with Vanderbilt coming to town.

After the win over Florida, the bandwagon for Tennessee is starting to get pretty full again even though the team only played one-half of good football against a team forced to start its No. 2 quarterback. But if the Vols are going to survive the next three weeks they are going to have to play a complete game.

Next week they will face a Georgia team eager to prove it is better than it appeared in the beating it took at the hands of Ole Miss. That game will be followed by a very tough Texas A&M team and Alabama.