Recap: No. 3 Louisville Cardinals At No. 5 Clemson Tigers—Wow! What A Game!

So far this season, many of the games featuring two ranked teams have been disappointments. More often than not, one of the ranked teams has ended up being a dud, and the other dominates a game that only family members of the winning team could consider entertaining.

But that was not the case when Clemson and Louisville faced off in Death Valley Saturday night. 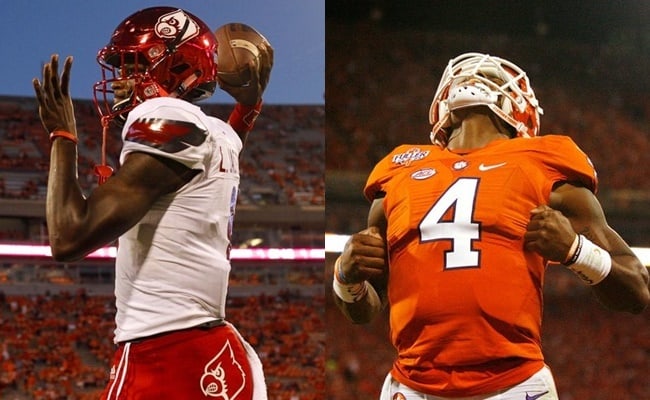 The game had all the trappings of a high scoring affair with two potent offenses led by Heisman Trophy candidates taking the field, but after the first quarter, it appeared to be a defensive affair. Neither offense could do much with the ball, but Louisville did get a drive going towards the end of the quarter that ended with the game’s first touchdown early in the second quarter.

With that score—the floodgates were open.

A pair of Louisville turnovers in the second quarter gave Clemson a short field, and the Tigers capitalized on both to take a 14-7 lead—but Deshaun Watson and company were just getting started. Clemson dominated the quarter, and by the time it ended, owned a comfortable 28-10 lead.

Some had wondered if Lamar Jackson and the Cardinals were for real or not. With how the game was going it appeared that Louisville was out of its league and that Jackson had some growing to do. He didn’t play especially well during the first half, and towards the end of the quarter he lost is cool because of something Clemson linebacker Ben Boulware did.

So did this mean Jackson and the Cardinals were not legit? You would think the No. 3 team would give the No. 5 team a better fight than the first half indicated. But there were still two-quarters left to play. By the time they were over, there would be no doubt the Cardinals and Jackson were legit.

But there is a reason why Clemson played in the national title game last year and came into the game with the longest active home winning streak in college football—when the chips are down, they figure out how to get the job done.

Clemson’s defense forced a three and out on Louisville’s next possession and drove down the field for the go-ahead touchdown on their next drive. But Louisville wasn’t done yet. Jackson got the team in position to win, but on 4th and 12 from the 14-yard line, he completed a pass to James Quick short of the first down—and Quick went out of bounds a yard short of the first.

Billed as a battle between Heisman candidates, the game did not disappoint in the end. Normally, in a game like this, the losing player would be out of the race, but not in this case. Watson certainly didn’t hurt his case in spite of his three interceptions (397 total yards, five touchdown passes).

Even though Louisville lost, Jackson will probably still be considered the front-runner. On the night, he completed 27 of 44 passes for 295 yards and a touchdown and just one interception. He also had another 162 yards and two touchdowns on the ground.

It was the first time this season he did not record at least five touchdowns.

Both teams are still in line to make the playoffs. Clemson will probably move into the top three next week and shouldn’t leave it unless they get upset. Louisville could win its way back in if they run the table, but to do so, they will have to take down a very tough Houston team in Houston.