It’s cliché. It’s been used a million times before and it will likely be used a million more. However, there have been few games where the statement holds true like it did Monday night. The game between No. 4 Florida State and No. 11 Ole Miss was truly a tale of two halves.

In the first half, it looked like the Seminoles were going to be in for a long season. Redshirt freshman Deondre Francois looked like he might be in over his head a little, Dalvin Cook forgot he’s supposed to be a Heisman contender, and their talented, veteran packed defense couldn’t slow down Ole Miss quarterback Chad Kelly. 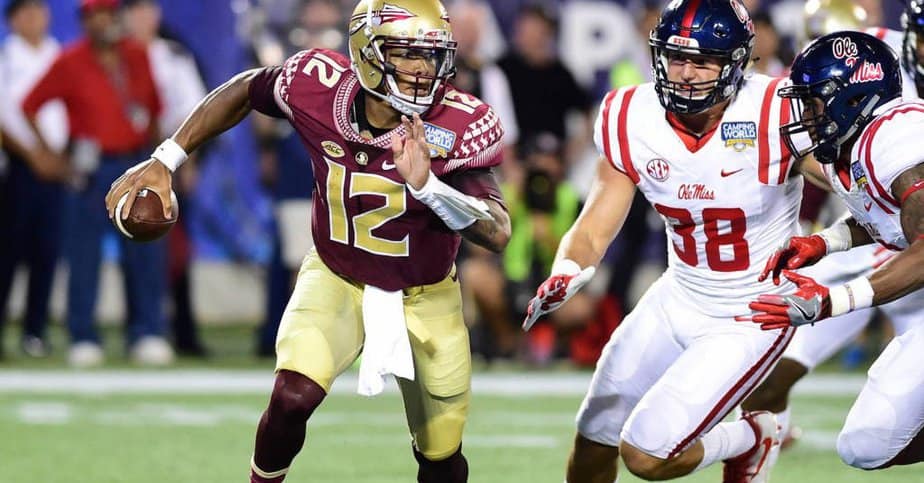 Thanks to a Florida State touchdown late in the second quarter, the score at the half did not look nearly as lopsided as the play was.  But with the way things went in the first half, there was every reason to think the score would be insanely lopsided by time the game ended.

Even though they were down by 15, the Seminoles had Ole Miss right where they wanted them. When trailing by more than 10-points at the half, the Seminoles have been 9-9 under Jimbo Fisher. Whatever Fisher said to his team during the intermission worked wonders because when the second half started the Seminoles looked like a team worthy of being ranked in the top five.

All the defense in the world wouldn’t have mattered if the offense failed to wake up—but it did. Whatever was holding Dalvin Cook back left and Francois appeared to have shaken off his first start jitters and led the Seminoles to points on every drive in the second half (except for the end of game drive).

“Things weren’t going right, but I couldn’t panic because my team needed me behind the wheel,” said Francois when asked about his mindset when the team was done by 25 (ESPN). “So I just kept chopping. We were down 28-6, but I couldn’t let them see me down, I had to portray the image that we were not about to lose this game.”

Ole Miss went from leading by 15 at the break to being behind by one less than six minutes into the second half and were down by 11 by time the third quarter was over. They rebounded with a touchdown early in the fourth to cut the deficit to five, but could only muster 10 yards of offense for the rest of the game.

In the end, Francois—the fourth freshman to start a season opener for the Seminoles in team history–lit up the Ole Miss defense for 419 yards and a pair of touchdowns (and 59 yards rushing). Dalvin Cook accounted for 192 yards of offense (91 rushing, 101 receiving), but was held out of the end zone for the first time since Week Three of the 2015 season (against Boston College) (ESPN).

Florida State’s kicking game did not miss All-American Roberto Aguayo (who was drafted by the Tampa Bay Buccaneers). His brother, Ricky, took over the job and tied a school record by going 6-6 on field goals.

Looking ahead, Ole Miss will need to figure out what happened and get it right next week when they take on Wofford, because the following week they have to face Alabama. Florida State will have an easy one against Charleston Southern before facing a Louisville offense that generated 663 yards of offense and scored a school record eight touchdowns against their Week One opponent (Charlotte).

Based off of Week One, Ole Miss will have some work to do in the weeks to come if it is going to have a shot at the playoffs, but the Seminoles look ready to claim their slot now.