Recap: No. 6 Houston Cougars At Cincinnati Bearcats—Offense Isn’t The Only Thing That Can Win Games

Spend any time around a diehard football fan and you are bound to hear the old saying about how offense wins games, but it’s defense that wins championships. Over the years there have been a few Super Bowl winners that wouldn’t have done it had their defense not dominated. So it is certainly an accurate statement.

But the Houston Cougars proved Thursday night against Cincinnati that defense could win games as well. 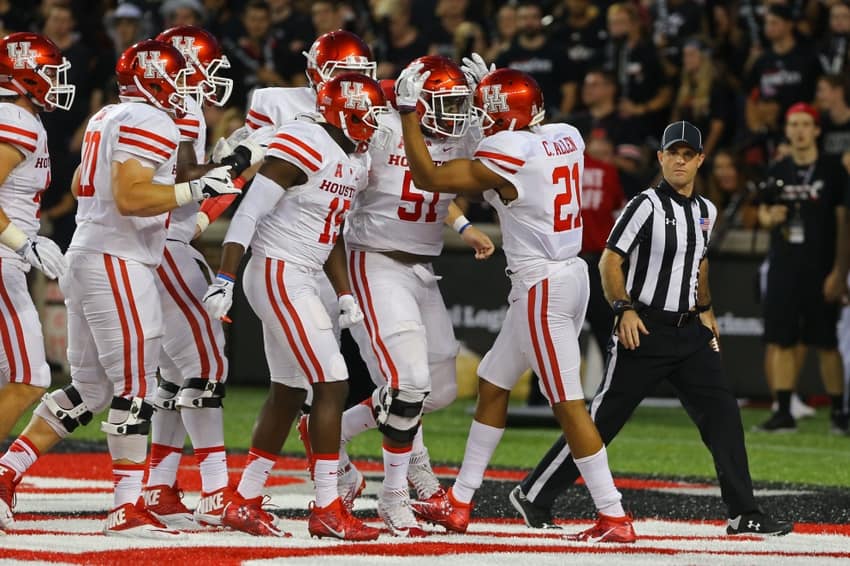 The Cougars have become known for their high-powered offense led by quarterback and Heisman Trophy candidate Greg Ward Jr. But after taking last week off to let a shoulder injury heal, he was not at his best against the Bearcats. So it was a good thing the defense was on fire and ready to step up.

Step up they did. When the offense started to struggle, they made sure the Cincinnati defense struggled more. After playing to a 10-10 tie at the end of the first half, the defense got the team back on top with a safety in the third quarter.

It wasn’t Ward’s best night, but he still ended up having a pretty good night with three touchdowns (one passing, two rushing) and 399 total yards (326 passing, 73 rushing), but he also threw a pair of interceptions and averaged only 2.8 yards a carry.

There were concerns about his shoulder going into the game, and afterward, Ward talked about it:

“It’s really not about me, it’s about the team. Whatever I do, I do it for the team,” Ward told ESPN after the game. “I was dealing with a lot of pain, but it really doesn’t matter. I was good enough to play, so I came out here and gave it my all and the team got the win.”

Head coach Tom Herman told the media after the game that it will take time for Ward’s shoulder to heal, but that it appears to be doing just that.

It will be interesting to see how the win affects the Cougars’ ranking when the new polls come out. The voters tend to be less forgiving of Group of Five teams that win games in spite of playing poorly for three-quarters of a game. However, they could also see the team as a complete competitor with how the defense picked up the slack and took over the game.

Depending on how the weekend’s action plays out, the Cougars could find themselves in a better position to break into the CFB Playoffs. Strength of schedule is going to be vital to Houston so if Oklahoma could take down No. 3 Ohio State it would make Houston’s win over the Sooners look that much better.

What will really hurt Houston’s chances will be if they have another game where they play poorly, but still pull out the win in the end. They can’t just win against Texas State, SMU, UCF, Connecticut, Navy, Memphis, and Tulane.