Posted on December 30, 2016 by Bryan Zarpentine 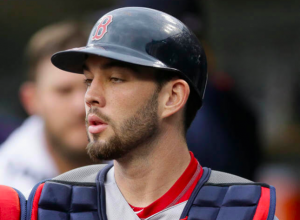 After an injury plagued 2016 and much speculation and uncertainty about where he fits in defensively, Blake Swihart is staying behind the plate for the foreseeable future. A report from WEEI in Boston indicates that the Red Sox have told Swihart that he will be a full-time catcher in 2017 and will no longer experiment with other positions after spending time in left field in 2016. However, there is no guarantee that Swihart will be Boston’s primary catcher in 2017, or even that he’ll be on the team’s opening day roster, as the Red Sox appear to have rather enviably amounts of depth behind the plate.

Swihart was Boston’s opening day catcher in 2016, but 10 days into the season he was optioned back to triple-A when Christian Vazquez returned from injury. It was at that point that Swihart was first exposed to left field, with the Red Sox hoping to find a way to get his bat in the lineup as often as possible. He was recalled the third week in May and played in 13 games for the Red Sox in left field before suffering a severe ankle sprain after running into a wall while playing left field.

Before the injury, Swihart was starting to produce consistently with the bat. Had he not been hurt, he could have provided the Red Sox with a permanent solution in left field, as the position was a revolving door of place holders for much of the season. But Swihart never made it back to the field in 2016, ultimately undergoing season-ending surgery on his ankle in August.

Running into the wall back in June may have been Swihart’s last ever action as an outfielder, as the Red Sox now plan on keeping him behind the plate. Andrew Benintendi likely has a hold of the every day job in left field, with Chris Young serving as the primary backup, leaving no room for Swihart in the outfield anyway. However, that doesn’t mean Swihart is a lock to be Boston’s opening day catcher for a second straight year.

The Red Sox appear intent on giving Sandy Leon the chance to be their primary catcher in 2017 after his strong second half in 2016. If Leon holds onto the starting job, Boston may prefer to carry Vazquez as the backup, as he’s considered to be better defensively than Swihart. This could leave Swihart on the outside looking in with regard to Boston’s catching situation, forcing him back to triple-A with no clarity of when he’ll get back to the big leagues.

It’s interesting to note that former Red Sox GM, Mike Hazen, who is now the GM of the Arizona Diamondbacks, has expressed interest in trading for either Swihart and Vazquez, as the Diamondbacks look to add a catcher before the starter of the season. However, the Red Sox don’t appear eager to trade either one, even if they have to send Swihart back to the minors. Boston’s refusal to consider a trade involving Swihart speaks volumes about how they view him, but does little to guarantee a spot on the opening day roster.

With Leon expected to miss part of spring training while he plays for Venezuela in the World Baseball Classic, both Swihart and Vazquez may have an opportunity prove themselves worthy of being the opening day catcher in Boston. But odds are, Swihart will begin the season in triple-A, as he still has minor league options. So while Swihart is likely grateful to put the outfield experiment behind him and stay behind the plate, it may not help the once top Red Sox prospect secure a big league job this spring.