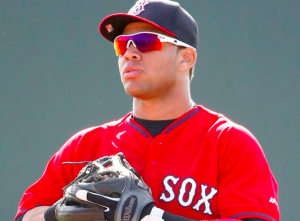 When MLB rosters expand on Thursday, the Boston Red Sox will be promoting second baseman Yoan Moncada, the top-rated prospect in all of baseball, according to MLB.com. The Red Sox announced after Wednesday’s win over the Tampa Bay Rays that Moncada will be with the team Friday when they begin a west coast road trip with a series against the Oakland Athletics.

Moncada is a 21-year old switch-hitter who signed with Boston in March 2015 after defecting from Cuba. The Red Sox gave him a signing bonus of $31.5 million, a record for an international free agent. When he signed, Moncada was 19 and one of the most celebrated prospects to come out of Cuba in recent memory.

Much like Andrew Benintendi, who experienced success in Boston before suffering a knee injury, the Red Sox will be promoting Moncada to the big leagues straight from double-A. Moncada began the season in advanced-A ball, and has just 177 at bats in double-A. However, in that short time, Moncada hit .277 with 11 home runs, three triples, and six doubles. He also stole nine bases.

Moncada has primarily played second base during his minor league career, but if he’s going to contribute to the Red Sox in September, it will likely be at third base, a scenario the team has already discussed. Boston has struggled to find a consistent solution at third base this season, with Travis Shaw, Brock Holt, and Aaron Hill, among several others, seeing time there with varying levels of success.

In anticipation of his promotion, Moncada has played 10 games at third base in double-A over the past month. Red Sox manager John Farrell says he has received positive reports on Moncada’s position switch. “He has shown good range; he’s got a well-above-average arm,” Farrell said. “Where there can be ongoing work and continued development is pretty much the same as when he was at second base, and that’s the ball straight at him. That’s more just pure technique and fundamental positioning of hands and feet. But as far as range to his glove side, moving over to third base, that has not seemingly been that big of a challenge for him.”

Of course, the Red Sox don’t plan to simply hand over the third base job to Moncada. The switch-hitting Moncada has been productive from the left side, but he has struggled batting right-handed against left-handed pitching, so he’s unlikely to play every day. However, Farrell says his team needs more production at third base, and so the more Moncada hits the more he will play.

Farrell also likes the idea of adding another young player to the team for the stretch run. “The one thing for those who have been around this team for a number of years, teams that have had success have always had an injection of young players late in the season that have helped carry the team to the postseason,” Farrell said. The manager thinks Moncada can have an impact similar to what Jacoby Ellsbury provided in 2007 and Xander Bogaerts in 2013.

The Red Sox are currently two games behind the Toronto Blue Jays in the AL East and hold a two-game lead for the top wild card spot, so they are in good position but are far from a lock to make the playoffs. Whether Moncada can be the difference maker the Red Sox envision him to be over the final month of the season remains to be seen. But the Red Sox believe he’s ready and they’re eager to find out if the best prospect in baseball can make an impact in September, and possibly October.