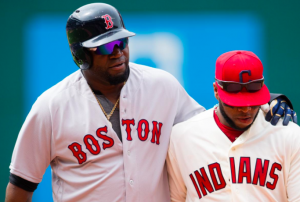 One of the most intriguing matchups in the first round of the MLB playoffs is the AL East champion Boston Red Sox facing off against former manager Terry Francona, who is now managing the AL Central champion Cleveland Indians. Outside of that storyline, these are two teams that are ecstatic to have won their division and return to the postseason, and both will enter the ALDS feeling good about their chances to reach the World Series. Let’s see how these two teams matchup against one another.

In terms of runs scored this year, these were the top two teams in the American League. However, the Red Sox scored 101 more runs than the Indians did, leaving no doubt that Boston has the more potent offense. David Ortiz had one of the best seasons of his career in his farewell season, and it’s not hard to imagine him coming through in a big spot at some point in the postseason. Outside of Big Papi, the young trio of Mookie Betts, Xander Bogaerts, and Jackie Bradley Jr. has been the driving force in Boston’s offense this season, with veterans Dustin Pedroia and Hanley Ramirez becoming regular contributors as well. From top to bottom, this may be the most dynamic lineup in the American League.

Of course, the Indians can score runs too, although they don’t quite have the same name recognition as some of the players in Boston’s lineup. Cleveland utilizes speed on the base paths better than any other A.L. team, which they hope will pay dividends in the postseason. The likes of Rajai Davis, Jose Ramirez, and Francisco Lindor help to set the table for power threats like Mike Napoli, Carlos Santana, and Jason Kipnis. Keeping up with Boston will be difficult, but the Indians have a lineup that can score plenty of runs.

A couple months ago, the Indians would have had a huge advantage over every A.L. team in this department, and it may have been enough to make them favorites to reach the World Series. However, with Carlos Carrasco and Danny Salazar unavailable and Corey Kluber returning from a quad injury, Cleveland’s rotation is a shadow of itself. If Kluber is healthy and effective, he could possibly start two games in a five-game series, which would be huge for Cleveland. However, Trevor Bauer, Josh Tomlin, and Mike Clevinger should not inspire great confidence the way they have pitched late in the season, especially against Boston’s potent lineup.

The Red Sox also have rotation issues for this series, as Steven Wright and Drew Pomeranz are both ruled out as options to start. David Price and Rick Porcello still provide a viable 1-2 punch atop the rotation, but the Red Sox have to be concerned about the prospect of Clay Buchholz and Eduardo Rodriguez starting when the series shifts to Cleveland in Games 3 and 4. Both teams are hurting in the rotation, and it’s difficult to discern if either is in better shape than the other.

Both bullpens put up impressive numbers this season, but Cleveland’s addition of Andrew Miller at the trade deadline gives them a slight advantage over the Red Sox bullpen. The Indians also have a little more depth in front of Miller and closer Cody Allen, giving them a slight edge in any game that goes to extra innings.

To be fair, Boston’s bullpen is nearly as good. After a slew of injuries earlier in the season, the Red Sox appear to be close to full health. However, the Red Sox don’t have as much depth as the Indians outside of closer Craig Kimbrel, who has had a couple of hiccups late in the season. It’s close, but the Indians have a slight edge in the battle of the bullpens.

With two lineups that can score runs and two rotations with missing pieces, there should be some crooked numbers in this series, as well as multiple games that end up being lopsided. If Cleveland’s rotation were at full strength, this would be their series to lose, but stifling Boston’s lineup over the course of five games is too difficult for the pitchers the Indians have available. Even with home-field advantage in a possible Game 5, the Indians don’t have the same quality of pitching they did a couple months ago, and this series ultimately belongs to the Red Sox.