Relevance For The Los Angeles Lakers Is One Trade Away 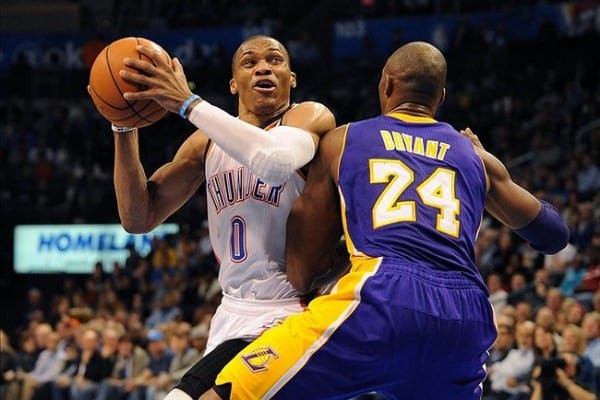 Fans of the Los Angeles Lakers are accustomed to their team being one of the best in the NBA, but for the last few years, they have been anything but the best. Even when Kobe Bryant was healthy, the team was terrible. But now that Kobe is gone the team can finally rebuild. The question, however, is how to do it.  Do they want to stick with the youngsters they have drafted, spend a bundle in free agency, trade for a current superstar that can make them relevant now, or some combination of the three?

If the plan was to stick with their youth and add some guys in free agency–well, they got it half-right.

They have a nice collection of young players from the last few drafts, Julius Randle, D’Angelo Russell, and this year’s pick Brandon Ingram. They have spent some money in free agency as well–but they didn’t do a very good job of it.

Los Angeles’s free agent acquisitions can be summed up with three letters–WTF?

Paying their guys wasn’t a bad idea. Jordan Clarkson isn’t a stud, but he’s not bad either. He’s worth $50 million over four years. Tarik Black’s deal is not terrible either ($12.85 million over two years). It’s the new guys they brought in.

The problem is the new blood they paid a bundle to obtain.

For some odd reason, they thought Timofey Mozgov was worth signing to a four-year, $64 million contract; a guy that didn’t play in eight of the Cavaliers 21 postseason games and only averaged 5.8 minutes a game and scored 15 total points when he did play.

To be fair, they are probably signing him more because he is a big ole boy (275 pounds, 7’1”) that can protect the rim. But how good can he be if the Cavaliers only saw fit to give him 25 minutes of playing time during the Finals?

Maybe he will prove the world wrong and do well in Los Angeles, but until he does, this acquisition will be one of the most ridiculed in recent history.

Los Angeles’s other free agent addition is not as much of a head-scratcher, but there is nothing impressive about it—Luol Deng, four years for $72 million.

It’s not that he isn’t a good player, but he certainly isn’t worth $18 million a season. Last year he barely averaged 12 points a game, but he did appear to get it together after the All-Star break when Chris Bosh was sitting out because of his health scare. After the Break, he averaged 15.2 points, 8.1 rebounds, 2.5 assists and 1.2 steals in 28 games (31.4 minutes/game) while shooting 48.4 percent from the field.

Deng is a solid player and will become the veteran presence that the young Lakers need, but he is not going to lead the team to glory. Swaggy P (aka Nick Young) probably thinks he will, but he’s an idiot. They need a difference maker; a guy that can force opposing teams to game plan for him. The kind of guy that can take over a game on his own.

The Oklahoma City Thunder are going to try to sign him to an extension, but with Kevin Durant gone it is unlikely he will. Like Durant, he is going to want to be with a contender, and it remains to be seen if the Thunder can be one minus Durant. Rather than let him walk in free agency next year, the Thunder would be smart to trade him now.

Would Westbrook want to go to Los Angeles? They aren’t exactly a contender, but if Luke Walton lives up to the hype and the youngsters on the roster become the stars everyone thinks they can be it is possible—in a few years.

Is Westbrook willing to go through the building process? He’s 27. If it doesn’t work, he’ll only be 31 when he re-enters free agency. He’ll be young enough to be a stud still, but too old not to choose a contender next time.

Los Angeles would likely have to give up some of their young talents for the trade to happen. While a guy like Westbrook would be a tremendous acquisition, the Lakers may be better off waiting until Westbrook official becomes a free agent.

That way they can have him and a young core.