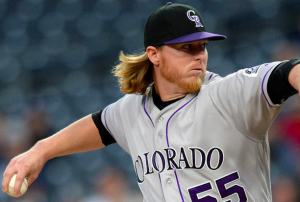 The Colorado Rockies have gotten off to a fast start in 2017 despite their starting rotation having the highest ERA in the National League. That rotation will now have to survive without ace Jon Gray, who the Rockies added to the 10-day DL on Friday with a broken foot. Rockies manager Bud Black expects Gray to miss at least a month of action, which is a serious blow to one of the most injury-riddled teams in baseball this season.

Gray suffered an injury to his left big toe during spring training but did not end up missing a start because of it. He made his first two starts of the regular season without any issues. However, he appeared to re-aggravate the injury while jumping to field a high chopper in the 2nd inning of Thursday’s game against the Giants. Gray managed to stay in the game for another inning but was removed one batter into the 4th inning.

The Rockies sent Gray for X-rays that revealed a stress fracture, but not in his big toe, rather in the navicular bone, which is located in the middle part of the foot. Gray could be seen in a walking boot Friday when the Rockies moved him to the DL, calling up reliever Shane Carle to take his spot on the roster.

Gray said he was “surprised” to hear about the injury, not expecting to be diagnosed with an issue that will keep him on the shelf for a month.

“It stinks to have a set-back like that,” he said Thursday before learning the severity of the injury on Friday. “But I’m just going to stay off it again and get it healthy.”

The loss of Gray is significant for the Rockies, who are already missing Chad Bettis, who is undergoing cancer treatment and may or may not return this season. Heading into the season, Bettis and Gray were set to be Colorado’s top two starters, and so the team’s rotation depth will be tested over the next month until Gray can return.

Chris Rusin, who threw 3.1 innings in relief of Gray Thursday, is a candidate to fill the vacant spot in the rotation when the Rockies need a fifth starter. Jeff Hoffman and German Marquez, two of Colorado’s top prospects, are both currently in triple-A and could potentially be called up over the next month while Gray is out.

Outside of rookie Antonio Senzatela, Colorado’s starters have struggled the first couple times through the rotation this season. Gray has arguably been the team’s second best starter this season, as the Rockies have won all three games he has started, including games in which they faced Clayton Kershaw and Madison Bumgarner. After a rough outing on opening day, Gray says he’s pleased his performance in his last two starts and confident he can keep it going when he comes back.

“It was one of my better-feeling days for a start, so it’s a little more disappointing,” Gray said of his 3-plus innings on Thursday. “But it’s (his effectiveness) not going anywhere. It’ll be there when I get back.”

In the meantime, the Rockies will have to find a way to get by without their young ace. Colorado’s bullpen has done a fine job thus far in 2017, but now the Rockies need their young rotation to step up in Gray’s absence. With Gray joining the likes of Bettis, David Dahl, Tom Murphy, and Ian Desmond on the DL, it may be difficult for the Rockies to keep up their early-season momentum.