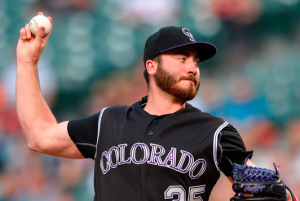 Colorado Rockies pitcher Chad Bettis announced to the world on Monday that he has been diagnosed with testicular cancer. Through his agent, Matt Sosnick, Bettis released a statement on Monday explaining the process of receiving the diagnosis and undergoing surgery in November to treat the disease. Bettis, 27, adds that he expects to make a full recovery and be ready to pitch when spring training begins.

“During an appointment in November, my doctor noticed an abnormality and ordered further tests and advanced blood work,” Bettis explains in the statement. “The following Monday, I was diagnosed with testicular cancer and had one of my testicles removed the next day, on Tuesday, November 29.

“I was completely caught off-guard by my diagnosis but have subsequently found that the vast majority of cases occur in men 20 to 40 years of age and that the survival rate is 99 percent when contained and caught early,” said Bettis, as he tries to raise awareness for the condition. “This only reinforces my belief that each of us needs to be totally in tune with our own physical health, and that taking action sooner than later when we feel like something is off can sometimes literally be the difference between life and death.

“The surgeon is very confident that the cancer was isolated and has not spread,” the statement continues. “The Rockies and the MLBPA have been great, and I truly appreciate the care and support shown by (Rockies GM) Jeff Bridich to both me and my family.

“My understanding is that I will be physically ready to have a normal spring training, and I greatly look forward to the upcoming season. I thank my friends and family for their love and kindness and ask that privacy be shown to both my wife and myself until spring training begins.”

Bettis solidified a spot in Colorado’s starting rotation last season, making 32 starts. He went 14-8 with a 4.79 ERA, and actually had a lower ERA and more wins while pitching at Coors Field than he did on the road, including a two-hitter against the San Francisco Giants at Coors Field in early September.

The Rockies have Bettis penciled in to be one of the leaders of their rotation next season. After many years of struggling to put together a pitching staff that can succeed at Coors Field, the Rockies have finally put together a group of young starting pitchers they believe gives them a chance to compete in the NL West. The group includes Bettis, Jon Gray, Tyler Chatwood, Tyler Anderson, and German Marquez. The 27-year old Bettis is actually the oldest of the group, making him an important part of the team’s starting rotation.

All of us at Sports Information Traders wish Chad the best of luck on his recovery and hope that he’s healthy and pitching in 2017.