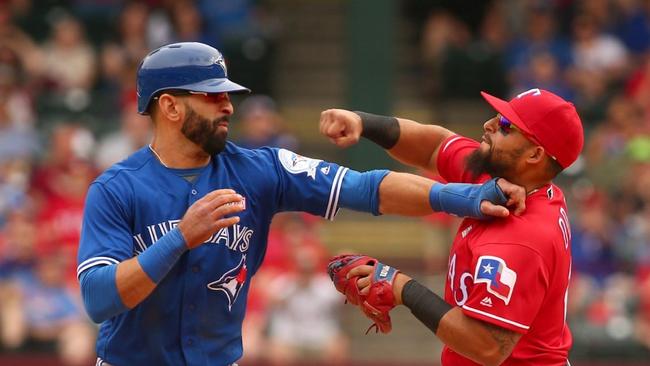 A perfectly crass idea related to the punch Texas Rangers second baseman Rougned Odor threw at Toronto Blue Jays outfielder Jose Bautista last week has been cancelled. A memorabilia store had scheduled an event for June 4, during which Odor would sign photographs of his now infamous punch that landed on Bautista’s face, but that event will no longer happen.

The Frisco, Texas store called Field of Dreams had booked Odor to make an appearance following last week’s chaotic confrontation between the Rangers and Blue Jays that resulted in 14 different players and coaches being punished. The store’s manager, Brett Kravitz, told media outlets Saturday that the event had been called off. The store had planned on charging $99 for a signed photo of Odor landing his punch on Bautista and $59 to have any other photo of Odor signed.

Kravitz said that fans would have had two choice phrases to pick from for Odor to write on the photograph for an additional $20. The first choice was “Don’t Mess With Texas,” a popular phrase in the Lone Star State, as well as a reference to Hall of Famer Nolan Ryan’s fight with Robin Ventura. The second phrase was “Bat Flip Will Get You A Fat Lip,” which, of course, refers to Bautista’s bat flip following a home run against the Rangers in last year’s postseason that ignited the tension between the two teams that eventually boiled over in last weekend’s brawl.

Despite the high prices, Kravitz says he was expecting around 500 fans to show up for the signing, with most of them wanting a picture of Odor’s fist on Bautista’s face. According to reports, Odor’s representatives backed out of the event, claiming that the timing wasn’t good. However, one has to wonder if there was any pressure put on Odor from the Rangers or Major League Baseball to call off the event and not capitalize financially from such a violent on-field incident. Of course, there’s already been a Fort Worth barbeque restaurant that has reportedly offered Odor free food for life following his not-quite knockout punch of the Toronto slugger.

Odor has continued playing since last week’s incidence, as he is appealing his eight-game suspension. The league is expected to hold a hearing early this week, and if the suspension holds, as it should, Odor will start serving the suspension right away. Even if Odor gets the eight-game sentence reduced by a game or two, he will miss at least a handful of games, which if nothing else, would free him up for a few days to eat some free barbeque, even if he wont’ be signing his name on any photographs of his infamous punch.