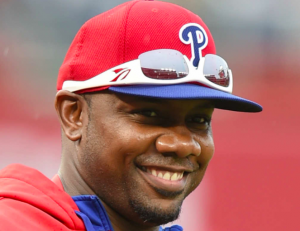 After a major league career that has lasted more than a decade and includes 1,475 hits, 382 home runs, and 1,194 RBIs, Ryan Howard isn’t done playing just yet. Despite going unsigned through the entire offseason and spring training, Howard has signed a minor league contract with the Atlanta Braves.

After spending parts of 13 seasons with the Philadelphia Phillies, the club paid Howard a $10 million buyout rather than bringing him back in 2017. Still, the 37-year old slugger let it be known after last season that he had “more in the tank” and would like to continue playing in the big leagues.

To many, it was surprising not to see Howard sign with a team over the winter, most likely an American League team, enabling him to serve as a DH. It’s perhaps even more surprising to now see him sign with a National League team, meaning he won’t be utilized as a DH outside of inter-league play if he ends up being called up by the Braves.

With Howard signing after the start of the regular season, he will now report to extended spring training and will ultimately be sent to Atlanta’s triple-A affiliate to prove that he can still play in the majors. If the Braves call him up, he’ll make a base salary of $750,000, a slight pay cut from the $25 million the Phillies paid him in 2016. Nevertheless, Howard is getting a chance to keep playing baseball.

“I’m excited and energized to get going and start this new chapter!!!!#atlantabraves” Howard tweeted Thursday evening.

“Just a no-risk proposition for a player with good makeup who was excellent in the second half last season,” Braves GM John Coppolella said of the team signing Howard. “He’s in good shape and has been training and waiting for an opportunity.”

“If he can do what he did in the second half of the season, he will help our team,” said Coppolella.

Outside of inter-league play, Howard won’t be able to DH for the Braves, and with Freddie Freeman entrenched at first base, there will be few if any opportunities to get him into the starting lineup. However, the Braves view Howard as a power hitter who could potentially make an impact coming off the bench and getting one at-bat a night.

“We’ve said we want to get our bench better,” Coppolella said. “We don’t have a lot of power on our bench right now, and he would help with that. There was no real risk on our end. He had a really good second half, he really hit well against right-handed pitching, he’s a great makeup guy, he’s good with young kids. You know, if it works it’s great. If it doesn’t, it’s not a big league (guaranteed) contract.”

“If he has something left, we’ll gladly take him, because we need him,” adds Freeman, one of just a few veterans on a young Atlanta team. “We have a lot of versatile guys on the bench. But he’s a guy who can still change the game with one swing of the bat.”

The Braves are currently carrying three catchers, and so the team could easily remove one from the active roster to make room for Howard when the time is right. Atlanta’s other bench players are Chase d’Arnaud, Emilio Bonifacio, and Jace Peterson, none of whom possess much power, so the Braves definitely have a need for a power hitter like Howard coming off the bench.

It remains to be seen when Howard will be ready for triple-A, much less when he may be considered for a big-league promotion. However, it’s great to see one of the best power hitters of his generation getting a chance to extend his big league career. It’s clear that he still wants to play and based on last year’s home run total, Howard still has plenty of power left in his bat. The Braves are wise to take a chance on him.