After last season, hopes were high for the Minnesota Vikings heading into this season—but then they lost their quarterback. When Teddy Bridgewater’s knee was destroyed during a non-contact drill in practice, the Vikings went from being a legitimate contender to just another team.

But then they pulled off “the Trade.” 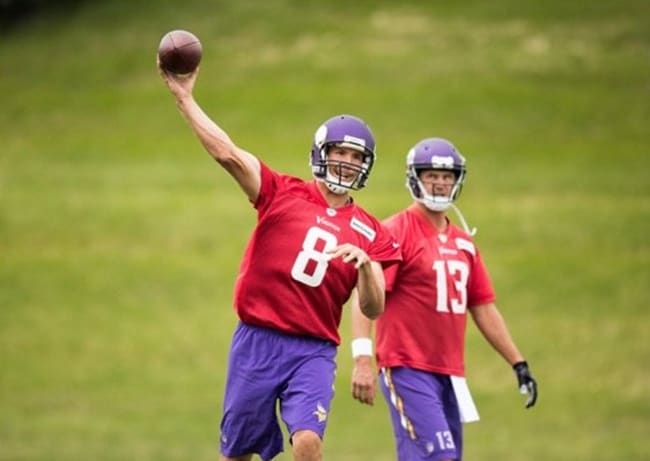 Rather than go into the season with an old career backup as their starting quarterback (Shaun Hill), they pried Sam Bradford away from the Minnesota Vikings with next year’s first round pick and a fourth round pick in the 2018 draft.

Stupid? Genius? It depends on who you talk to.

During his time in the NFL, Sam Bradford has not proven to be nearly as good as you would think a No. 1 pick would be. His career record is 25-37-1. Since entering the NFL in 2010 he has earned a QBR of just 40.5, fourth worst in the league (minimum of 30 starts).

The only guys he graded better than were Blaine Gabbert, Chad Henne, and Mark Sanchez—not exactly top-notch company.

His track record is terrible. So why on Earth would you trade the future away for this guy.

The answer to that is pretty easy–they didn’t trade the future away. The Vikings have a good enough core of young talent to be able to survive one draft without a pick in the first round. One player could help, but he isn’t going to make or break the team anyway.

With that young core and the best running back in the NFL in Adrian Peterson, the Vikings are primed to win now–but AP is not a young man. Technically, he has already hit the over-the-hill age for running backs (31) which could mean he is due to lose a step at any given moment. He did appear to lose one last season, but that does not mean he will not this year or the next. To get the most out Peterson before he loses too many steps, the Vikings needed a better quarterback than Shaun Hill. He’s good backup and a decent guy in case someone goes down for a game or two, but he is not going to lead the team to the Super Bowl. At best, he is one of those guys you hope doesn’t lose the game for you.

You definitely don’t expect him to win it for you. Sam Bradford, on the other hand, could.

“I watched every game Sam played last year, and the last three games, I thought he was playing as well as anyone I saw last year,” Spielman said. “I don’t think he’s ever been on a team with a top 10 rushing offense. With 28 [Adrian Peterson] in our backfield, playing at a high level, with the defense we have, Sam’s not gonna have to throw it 35 or 40 times every game. I know our coaches wanted him.”

How much talent has Bradford every played with? Steven Jackson was in decline already when the Rams drafted him. He never had much talent at wide receiver while he was with the Rams either. The Philadelphia Eagles receivers suffered from a season-long case of the drops last year, and DeMarco Murray had trouble running out of a wet paper bag.

In Minnesota he will have a good offensive line protecting him while it opens up holes for one of the best running backs to ever play the game. Stefon Digs and rookie Laquon Treadwell are going to be a dangerous tandem for years to come at wide receiver, and tight end Kyle Rudolph isn’t half bad either.

Should he struggle, which he will at first since he doesn’t know the offense and has no relationship with his receivers, the defense is good enough to keep them in games while Bradford gets up to speed.

Right now, we don’t know if Bradford will start against Tennessee or if Shaun Hill will get the nod. It probably doesn’t matter either way. Bradford can’t be too familiar with the offense and is not going to have much of a relationship (if any) established with his receivers. Shaun Hill will be better suited to start Week One—but the team is not saying who will start yet. The team will lean heavily on Peterson against the Titans no matter who starts.

Since the Vikings will probably be a little one-dimensional on offense against the Titans, the pressure will be on the defense to shut down Marcus Mariota, Derrick Henry, and DeMarco Murray for the team to have a good shot to pull out the win. It’s possible, but it makes betting on the Vikings a little risky in Week One.

However, going forward, as Bradford gets acclimated to the offense and develops a relationship with his receivers, the Vikings should become a very tough team to handle. It will take them a couple weeks, but once Bradford and the receivers get their timing down…