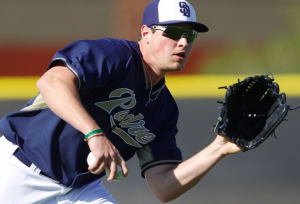 The San Diego Padres are going to get a sneak peek at their future over the final week and a half of the 2016 season. Outfielders Hunter Renfroe and Manuel Margot, catcher Austin Hedges, and infielder Carlos Asuaje were among the players called up by the Padres from triple-A on Wednesday, all of whom are noteworthy prospects the Padres are hoping can help turn the organization around in the years to come.

The reason for the delay in calling them up so late in September is that San Diego’s triple-A affiliate in El Paso won the Pacific Coast League championship and played a one-game triple-A championship Tuesday night against the New York Yankees triple-A affiliate. El Paso lost Tuesday’s game to Scranton, but the Padres are now free to call up some of their top prospects, including some who will be getting their first taste of big league action.

“It’s an exciting time for them,” said Padres manager Andy Green on Wednesday. “These guys, especially the ones that are coming up for the first time, they’ve earned this right to be here. All of them have done very well, and we’re all very excited to get them.”

Margot is the most intriguing of the prospects called up. He was acquired last winter from the Boston Red Sox in the Craig Kimbrel trade, and he had a solid debut season in San Diego’s farm system, hitting .303 and stealing 30 bases at triple-A.

He’s light on power, but Margot hits for a high average and has the speed to collect plenty of doubles and triples. Margot’s speed also serves him well in the field. The Padres are hoping he will ultimately emerge as the team’s center fielder of the future. He has developed a little faster than anticipated, as the Padres were not expecting him in the big leagues until next year. Margot, who will turn 22 next week, may begin 2017 back in the minors, but he could be ready for a full-time job in the majors by the all-star break.

Renfroe is a more polished outfielder, mashing 30 home runs and 34 doubles in triple-A this year. He complemented that power with a .306 average and solid defense in right field, where his arm has the potential to be an asset. The 24-year old Renfroe has a chance to be San Diego’s opening day right fielder next season, and it wouldn’t be a surprise to see him in that role to close out the 2016 season.

Hedges played 56 games with the Padres last season, but after hitting just .168, San Diego sent him back to triple-A for the entire 2016 season. He posted a slash line of .326/.353/.596 at triple-A this year, giving the Padres hope that he’s ready to take over as the team’s full-time catcher. With Derek Norris and Christian Bethancourt both having disappoint seasons offensively, Hedges could see a lot of playing time down the stretch, as San Diego gives him a chance to audition for next year.

Asuaje was also a part of the Kimbrel trade and had an impressive offensive season at triple-A while playing primarily at second base. He’s a natural hitter, although he’s a bit undersized, so he profiles best as a utility player, as he can play multiple positions. However, the Padres are far from set at second base, which could open the door for Asuaje to make a case for himself playing there next season during this brief September audition.

Members of San Diego’s front office are on record saying that they don’t expect the team to compete for another two or three seasons behind this year. However, with four young players coming off impressive seasons at triple-A all coming up for the final two weeks of the season, the Padres may be ready to compete sooner than expected. San Diego has a strong farm system, and with some of their most promising prospects making an appearance in the majors late in the season, the Padres may be on the verge of turning a corner in their rebuilding effort.