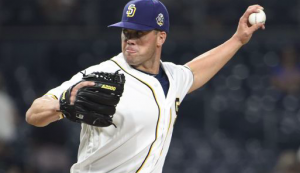 The San Diego Padres aren’t expecting to compete in 2017, but they are still doing what they can to avoid being a laughing stock. The Padres have already added two starting pitchers to an otherwise young, unproven rotation, and there are rumors that they could add a third. After agreeing to terms with Jhoulys Chacin over the week, the Padres announced on Tuesday that they have also re-signed lefty Clayton Richard. There are also rumblings about San Diego having an interest in signing Jake Peavy.

Richard’s deal with the Padres is for one year and $1.75 million. He can also earn another $1 million in incentives. Richard first came to San Diego from the Chicago White Sox at the trade deadline in 2009, ironically in a trade involving Peavy. He stayed in San Diego through the 2013 season and had a few good seasons, winning 14 games in both 2010 and 2012.

However, Richard had a miserable 2013 season that was plagued by shoulder issues. He became a free agent following the season, but didn’t catch on with another club until the following August when he signed a minor league deal with the Diamondbacks. He didn’t pitch in the big leagues in 2014, but Richard found a home with the Cubs in 2015. However, he struggled mightily back in Chicago in 2016 and was ultimately released in August, when the Padres picked him up for his second stint with the club.

In 11 appearances, nine of which were starts, for the Padres late in 2016, Richard went 3-3 with a 2.52 ERA. It was a small sample size after a few rough seasons for Richard, but it was enough for San Diego to give him another chance. He and Chacin should now front a rotation that also includes Jarred Cosart and Christian Friedrich, as well as a few young arms who figure to battle in spring training for the final spot or two in the rotation.

Richard, Chacin, and Cosart should provide the Padres with some semblance of stability in their rotation next season, although rumor has it they’re looking for at least one more veteran. San Diego is specifically looking at Peavy, who came up with the Padres, spent eight seasons in San Diego, and won the 2007 National League Cy Young as a member of the Padres. There are reports that the Padres have had contact with Peavy, who isn’t likely to garner much attention on the free agent market this winter.

As great as Peavy has been throughout his career, particularly during his early years with the Padres, he’s coming off a rough season with the San Francisco Giants in 2016. He went 5-9 with a 5.54 ERA and was eventually moved to the bullpen, where he was even worse than he was as a starter. Even though Peavy had a solid 2015 season, despite two separate stints on the DL with back issues, teams aren’t exactly rushing to sign the 35-year old Peavy, believing his struggles in 2016 indicate he’s over the hill.

Of course, this could create the perfect situation for Peavy to return to San Diego in hopes of prolonging his major league career. The Padres are certainly open to any veteran major leaguer who would sign a one-year deal for a modest amount of money, especially one with whom they have a history. Meanwhile, Peavy may consider himself fortunate to receive a major league contract with any club. Nothing is certain at the moment, but there has been contact between the two sides, and on the surface, Peavy would make a nice addition to Chacin and Richard in San Diego’s rotation in 2017.