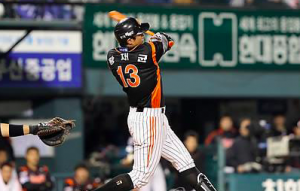 Outside of signing closer Mark Melancon, the San Francisco Giants haven’t made any noteworthy moves this offseason. Instead, they appear to be looking for minor moves they can make that could end up making a meaningful difference. One of those minor moves could involve signing a player from overseas, as recent reports indicate the Giants are “showing continued interest in Jae-gyun Hwang, a third baseman from South Korea.

Hwang is a 29-year old who has played with the Lotte Giants of the Korean Baseball Organization (KBO) since 2010. He was originally posted for a move to MLB in the fall of 2015, but none of the 30 teams made a bid to sign him. However, he seems intent on playing in the big leagues and could be an interesting option for a major league club.

Last year in the KBO, Hwang reportedly hit a career-high .335 with 27 home runs, 113 RBIs, and 25 stolen bases. His career slash line in the KBO is .285/.349/.433. He held a showcase for big league clubs in November with roughly 20 teams having scouts in attendance, but none have made him a formal offer. Multiple teams in the KBO are interested in signing Hwang, but at the moment he appears motivated to find his way to the majors one way or another.

Hwang is considered to be one of the best position players in Asia, although big league interest in him has been tepid. Traditionally, few position players have made the jump from the KBO to the majors, as most consider it to be a slightly lower level than the Japanese Baseball League and a considerable step down from the majors. However, the on-field success of Jung-Ho Kang of the Pittsburgh Pirates has started to change that perception.

From San Francisco’s perspective, Hwang could be an interesting player to take a chance on. The Giants have Eduardo Nunez penciled in at third base, although he could be moved to a super-utility role if San Francisco finds a solution at third base elsewhere. Coming from the KBO, Hwang is far from a guarantee to become a full-time third baseman in the majors. On the other hand, his insistence on coming to the majors combined with little interest from other teams means the Giants may be able to sign him at an affordable rate.

With Justin Turner returning to the Dodgers, there are few intriguing options on the free agent market among third basemen. Luis Valbuena and Trevor Plouffe are likely the best third base candidates available in free agency, although neither is likely to encourage the Giants to push Nunez out at third base. On the trade market, Todd Frazier would be ideal if San Francisco were willing to part with the prospects to get him with one year left on his contract. With few compelling options on the market, it’s not surprising that Hwang is on San Francisco’s radar.

Of course, there’s nothing to suggest that Hwang signing with the Giants or any other major league club is imminent, especially with the market at a virtual standstill. Nevertheless, he’s an intriguing option in a third base market that lacks genuine difference makers outside of trading for Frazier, which would likely come at a high cost. When MLB teams finally resume signing players, Hwang could be a player to watch, especially when it comes to the Giants, who are eyeing an under-the-radar move with considerable upset, which is exactly what Hwang could be.