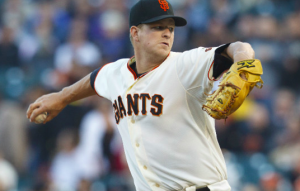 Matt Cain has known no other organization besides the San Francisco Giants. He was the team’s first round pick in 2002 and has been with the Giants ever since. During that time, he’s made three all-star teams as a member of the Giants, pitched a perfect game, and helped San Francisco win three World Series championships. Despite all that, the Giants are not giving Cain a free pass with regard to a spot in the team’s starting rotation in 2017. After three consecutive seasons plagued by injuries and subpar performances, the Giants say that Cain will be competing for a spot in the starting rotation during spring training.

The Giants will enter spring training in the enviable position of having four starters locked into rotation spots in Madison Bumgarner, Johnny Cueto, Jeff Samardzija, and Matt Moore. But GM Bobby Evans said on Friday that Cain is not part of that group; there will be a competition for the fifth and final spot in San Francisco’s rotation.

That being said, the Giants are rooting for Cain to succeed. Evans said Friday that “in a perfect world Matt Cain would be Matt Cain and take that spot,” adding, “We have to give Matt a nod relative to what he’s accomplished.” That sounds like a vote of confidence in favor of Cain, but he still needs to earn his place in the rotation.

In 2014, Cain had three separate stints on the DL for three different injuries, the last of which required surgery on his elbow that caused him to miss the postseason during San Francisco’s most recent World Series win. Cain continued to have elbow trouble in 2015, limiting him to 11 starts and two relief appearances. In just 60.2 innings that year, Cain posted a 5.79 ERA. Last year, Cain missed close to two months with a hamstring strain and was later sidelined with a back issue. When he was healthy, Cain was just 4-8 with a 5.64 ERA.

Not only does Cain have to stay healthy to claim the final spot in the rotation, but he’ll also have to beat out a few competitors. Lefty Ty Blach is the most likely to take the spot away from the 32-year old veteran. Blach made two starts and two relief appearances for the Giants last year, including eight shutout innings against the Dodgers the last weekend of the regular season. Blach is not a heralded prospect, but after winning 14 games in triple-A last year and finishing the season strong in the big leagues, he’s a legitimate candidate for the fifth starter spot.

Top prospects Tyler Bedee and Andrew Suarez have also been mentioned as possible contenders for the open spot in San Francisco’s rotation. Bedee is the team’s top pitching prospect, and while he’s yet to pitch at triple-A, he’s a polished pitcher who posted a 2.81 ERA in 24 starts at double-A last year. Suarez may be a long shot to win a rotation spot out of spring training, but like Bedee, he’s advanced for a pitcher who is yet to see triple-A.

If Cain can’t hold off Blach and company, the Giants may have no choice to put him in the bullpen. For what it’s worth, Cain was solid in four relief outings last year, and the Giants could certainly use a little more depth back there. But Cain hasn’t pitched for the Giants for more than a decade to end up in the bullpen; he’s a strong competitor who wants to hold onto his spot in the starting rotation. However, in what could be his last season in San Francisco, the Giants aren’t guaranteeing Cain a spot in their rotation, giving him a lot of work to do and something to prove during spring training.