Scott Boras Says Harper, Strasburg Will Be Healthy for 2017 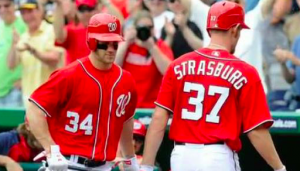 At the top of the list of questions facing the Washington Nationals this offseason is the health of star outfielder Bryce Harper and star pitcher Stephen Strasburg. However, agent Scott Boras, who represents both players, said Thursday that both will be healthy for 2017 and both will begin normal offseason training starting next week. The news is obviously good for the Nationals, but it does to some extent confirm that Harper was not completely healthy towards the end of the season.

Harper, as we know for sure, was dealing with a thumb injury he suffered sliding into third base late in the regular season. However, for much of the season, there were also questions about a shoulder and neck injury that may have been hindering his performance. SI’s Tom Verducci reported on two separate occasions that a shoulder issue was affecting Harper both in the field and at the plate.

Harper’s stats would back up the belief that something wasn’t quite right, as he hit a career-low .243, which was 27 points below his previous career-low during his rookie season. He also endured several prolonged slumps over the course of the season, which is uncharacteristic of him. There was also speculation that he was altering his outfield positioning to hide the fact that he did not have his usual arm strength.

Of course, both Nationals manager Dusty Baker and GM Mike Rizzo denied Verducci’s assertions on multiple occasions. Harper did the same for a while, but eventually declined to talk about it. If Boras is right in saying that Harper will undergo a normal offseason, it means that whatever the issue was, it has subsided on its own following the conclusion of Washington’s season, and that it’s unlikely to return.

Harper’s health is not only a concern for Washington’s hopes of returning to the postseason in 2017, but for Boras it will start to be an issue with Harper just two years away from free agency. The Nationals would obviously be interested in keeping Harper in Washington long term, but Boras will most likely want him to explore the free agent market, where he could set himself up for an historic payday if he can bounce back from a subpar 2016 season, assuming he’s healthy moving forward.

As for Strasburg, news that he will go through his normal offseason routine confirms that he has recovered fully from the flexor-mass strain that shut him down late in the season. The Nationals had hopes of getting him back if they advanced to the NLCS, but Washington yet again saw its season end in the NLDS, preventing Strasburg from pitching in the postseason. There was initially some concern that Strasburg may have to undergo a second Tommy John surgery, but the issue was deemed not that serious. The reassurance from Boras on Thursday should allow the Nationals to rest easy, knowing that Strasburg will report to spring training healthy.

With Harper and Strasburg both healthy, the Nationals should be in good shape heading into 2017. The team will have a few issues to address this offseason, and they should expect a little more competition from within the NL East than they faced the second half of 2016. But a healthy Strasburg and Harper is a great starting point for 2017.