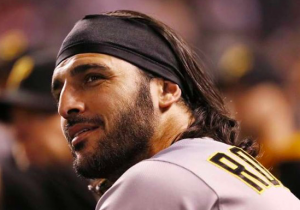 When Sean Rodriguez, one of the newest members of the Atlanta Braves, got in a car accident last month, initial reports were that he had escaped relatively unharmed. However, there are now reports that he may not have been so lucky. Over the weekend, it was reported that that Rodriguez would be sidelined for the next three to five months due to shoulder surgery to correct an injury he suffered in the accident. But the Braves are now unsure if he’ll be able to play at all in 2017.

“He’s going to be out indefinitely,” Braves GM John Coppolella said Monday. “We hope he comes back as soon as possible. We’re not sure yet if it’s realistic that will be for the 2017 season. We don’t have enough information.”

That statement indicates that the Braves don’t even have an educated guess on when Rodriguez will be able to play. Coppolella says that the details of the surgery Rodriguez will undergo have yet to be finalized, and until then the team can’t be sure of how long he’ll be out. Rodriguez signed a two-year deal with the Braves earlier this offseason, so the club does have some long-term interest in his health.

Once the Braves determined that Rodriguez, who figured to be Atlanta’s primary second baseman in 2017, would likely be out for a significant period of time, they renewed their interest in acquiring Brandon Phillips from the Cincinnati Reds. The Braves attempted to trade for Phillips, a Georgia native, earlier this winter, but Phillips exercised his no-trade clause to block the trade.

Soon after news broke that Rodriguez would be out at least three to five months, the Braves were able to acquire Phillips in a trade with the Reds. Without Rodriguez available, the Braves would have had to survive with Jace Peterson and Chase d’Arnaud splitting time at second base, creating a sense of urgency with regard to trading for Phillips.

The long-time Cincinnati second baseman will now become Atlanta’s every day second baseman. Not only will he help to fill the void with Rodriguez out, but Phillips will also act as a placeholder for prospect Ozzie Albies, who should be major league ready by this time next year.

“We see Brandon as somebody who is going to help us this year,” says Coppolella. “We’re always cognizant of our prospects. That’s why we’ve made mostly short-term deals but we’re excited about what Brandon brings to us in 2017.”

If Rodriguez is able to return this season, he will likely fill a utility role based on where the Braves need him. However, Coppolella says that Rodriguez returning to the team isn’t the biggest priority at this point. “More important than when he gets back to playing with the Braves is the health and well-being of his family,” Coppolella said. “We want him to get healthy and get right and take care of his family.”

The words of the Braves GM paint a rather bleak picture for Rodriguez in 2017. The Braves are still unsure of the exact surgery he needs on his shoulder, and so there is great uncertainty about how long he’ll be on the shelf. However, the team appears to be preparing as if they won’t have him at all in 2017.