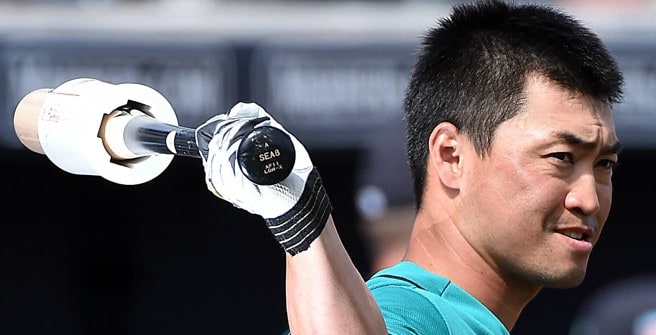 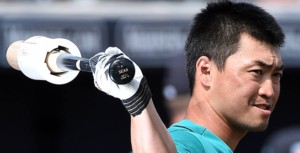 In a move that was at least a little surprising to everybody but him, the Seattle Mariners demoted outfielder Nori Aoki to triple-A on Friday. The 34-year old Aoki has hit just .245/.343/.313 this season and will experience the minor leagues for the first time in his career outside of a few injury rehab games. On the surface, demoting a 34-year old who has more than four full seasons in the big leagues under his belt seems like an odd decision, but Aoki responded Friday as if he was expecting it.

“I haven’t been able to produce as I always do and up to my standards,” Aoki said through a translator. “So I figured that’s the way MLB works. I wasn’t surprised.” Aoki has a career line of 287/.353/.386, but he’s produced well below those numbers this season. He’s also not provided a viable solution for Seattle in the leadoff spot, a role the Mariners hoped he would play this season.

Seattle manager Scott Servais noted Aoki’s struggles against left-handed pitching as a primary cause for the demotion. “Nori considers himself an everyday player and to be an everyday player you’ve got to be able to hold your own against the lefties as well as the righties. His numbers up against right handers are very similar to what he’s done his whole career, we just haven’t quite seen it from the lefties yet. So it’s an opportunity that I think he’ll take it in the right way, an opportunity to work on some things and with there being a position that when our pitching does get straightened up here, then we can bring him back,” Servais explained to reporters on Friday.

The move was also necessary, at least in part, by Seattle’s need for an extra arm in the bullpen after Adrian Sampson was ruled out of his start Thursday during warmups, forcing the team’s corps of relievers to pitch all 10 innings in the team’s loss to the Detroit Tigers. The Mariners brought up three pitchers, Wade LeClanc, Donn Roach, and David Rollins, from the minors on Friday to reinforce their pitching staff.

With Aoki in the minors for the time being, the Mariners expect to use Nelson Cruz in the outfield on a regular basis. Also, instead of a platoon of Adam Lind and Dae-Ho Lee at first base, those two players will likely be in the lineup together for the time being, with one of them moving into the designated hitter role.

Of course, the team does not believe Aoki’s demotion to the minors will be permanent, nor does he. “I feel sad that I haven’t been able to contribute to the team as much as I’d like to,” Aoki said. “But on the other hand, it motivates me to come back again as fast as I can and produce up here. There’s still a lot of the season left. Hopefully I can come back and help the team out in the second half.”

The Mariners have fallen hard and fast over the past month, as they now have a .500 record and have slipped below the Houston Astros into third place in the AL West. Seattle is 10 games behind the Texas Rangers in the division, but just 2.5 games out of the second wild card spot. After struggling for much of the month and losing six straight until Friday’s win, the Mariners need to get things turned around quickly, and they need Aoki to come back and be the player they thought they were getting when they signed him this winter.