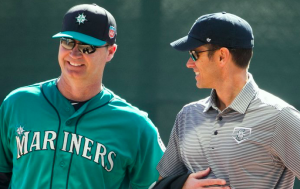 It took roughly three dozen trades, all of which came in a span of less than 16 months, but Seattle Mariners GM Jerry Dipoto finally appears satisfied with the look of his team. After an offseason that included one trader after another after another, the Mariners appear to be all but done making moves this winter, and Dipoto seems to be pleased with how his team looks, at least on paper heading into spring training.

Dipoto has been busy ever since he was hired as the Mariners GM in September 2015. In that short time, he’s made 36 trades. This winter alone, he made 11 trades. Factoring in two free agent signings and two waiver claims, the Mariners have added 18 players to their 40-man roster this offseason, turning over roughly half the roster from a team that finished second in the AL West last season, nine games behind the Texas Rangers, and just three games out of a wild card spot.

Dipoto and the Mariners finally put the finishing touches on their offseason on Wednesday, pulling off a pair of trades in quick succession to acquire lefty starter Drew Smyly from the Tampa Bay Rays. “You may not hear from us again,” Dipoto said in the aftermath of Wednesday’s trades. “I am 100% certain that we will now look at minor-league deals, bringing guys in to compete in camp for bench roles or depth roles. I think what you see is what you get. This is our team.”

Trades for Jean Segura, Mitch Haniger, Yovani Gallardo, and Jarrod Dyson, all of whom figure to play a prominent role for the Mariners in 2017, may have been enough for the Mariners to feel confident heading into the season. But the addition of Smyly to an already formidable and deep rotation on Wednesday, according to Dipoto, was the last and crucial step the Mariners had to take this winter, which is why Dipoto reportedly made a concerted effort for much of the winter to acquire him from the Rays.

“Our five starters are already in-house and we like the depth we’ve created in back of them, Dipoto said. “We feel the combination of veteran experience and young upside in the bullpen is particularly intriguing with a lot of hard throwers and bat-missers.”

In addition to pitching, defense was also a point of emphasis for Dipoto this offseason. With the Mariners playing their home games in a spacious ballpark, not only did Dipoto see fit to acquire a fly-ball pitcher like Smyly, but he also made sure Seattle has a defense that can prevent as well as they can score them.

“The one thing I don’t want to sell short is how much attention we paid to run prevention,” Dipoto said. “While we may not have added big names on the pitching side, everybody brings something to the table. And the addition of Dyson, Haniger and Segura should help us prevent runs. We feel we’ve made the defense dynamically better.”

Scoring runs wasn’t an issue for the Mariners last year, as they were third in the American League in runs scored, and it shouldn’t be a problem in 2017 with the heart of Seattle’s lineup remaining intact with Kyle Seager, Robinson Cano, and Nelson Cruz. Now, thanks to nearly a dozen trades by Dipoto this offseason, the Mariners look considerably better when it comes to pitching and defense. After a wild and crazy offseason, Dipoto finally appears content with the team he’s assembled, and in a few months, we’ll find out just how good they can be.