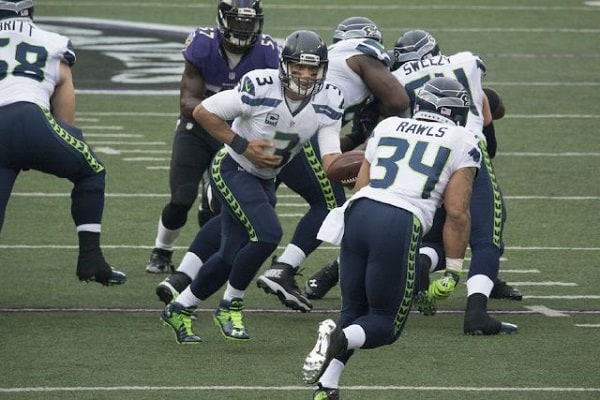 The 2016 NFL season’s opening week is in the books, which means it’s time to look at Week 2’s picks against the spread. Sunday afternoon, we have an NFC West matchup between the Seattle Seahawks and Los Angeles Rams. Who has the best odds in this one?

This line opened at -3.5 in favor of Seattle, but given the Rams’ complete ineptitude in a 28-0 blowout loss to the San Francisco 49ers, it’s not surprising that it jumped up to -6.5.

Honestly, this Rams team was just horrible. They couldn’t slow down Blaine Gabbert or the Niners running game defensively; and offensively, Case Keenum looked dreadful, even though San Fran was stacking the box and keying on Todd Gurley.

All the while, Jared Goff has opened the season at third string on the depth chart. In fact, he wasn’t even active for Sunday’s game. Odds are, he won’t be for this one either. It’s a troubling scenario for the No. 1 overall pick in the draft. This week, a story popped up from Keyshawn Johnson, who believes based upon his sources that head coach Jeff Fisher never wanted to draft Goff, but was forced to. Thus, Fisher decided to start Keenum (who said he was “seeing ghosts” against the Niners) and have Sean Mannion as the backup, rather than provide any opportunity to Goff.

Now, that is — at this point — just a rumor. Other sources, such as NFL Network’s Michael Silver, have been told by Fisher himself that Goff was always his top target.

So, who to believe for Rams fans? Is Fisher upset about drafting Goff, or is he trying to groom him and let him learn more before throwing him into the fire?

It’s a tough call, no doubt; regardless, starting Goff is out of the question against an elite Seahawks defense.

In Week 1, the Seahawks held the Miami Dolphins to just 10 points, winning 12-10. If they held the Dolphins to only two scores, I’d be shocked if a Keenum-led Rams offense could muster much more. And as we saw last week, this Rams defense has taken a step back, which isn’t a shock.

Los Angeles lost several starters on defense this offseason, and then proceeded to trade away many of their draft picks to secure Goff. Losing guys like Janoris Jenkins, Rodney McLeod, Chris Long and James Laurinaitis without getting any solid replacements is definitely going to take a toll.

Russell Wilson and company struggled to get things going against a tough Dolphins front, but that shouldn’t be an issue this week.

Bets to Make: In the past few years, the Rams have played surprisingly well against their perennial Super Bowl contending rivals. However, that just isn’t in the cards this year, as the team truly has taken a step back. Lay the points on that -6.5-point line, and take the under.