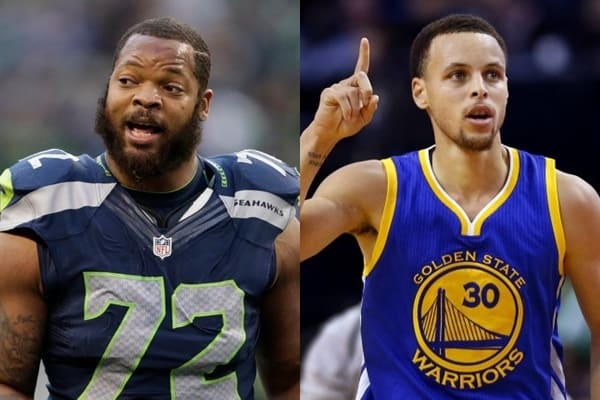 Seattle Seahawks defensive lineman Michael Bennett is a big ole boy. At 6’4” and 274 pounds, that is somewhat of an understatement. Those who have played against him know how powerful and violent he can be. Ask any of them and they will probably tell you that it is not a good idea to anger or displease him.

His displeasure with Curry has nothing to do with how the Warriors lost the NBA Finals, but something that hits close to home for Bennett. He doesn’t like that Curry, and other athletes come to Hawaii to host sports camps and charge kids a lot of money to attend.

“I see a lot of different athletes come through Hawaii whether it’s Steph Curry or whoever it is,” Bennett told the local media. “They all come here, and it makes me mad because I live in this community, and I understand this community — that there’s so many kids who can’t afford to pay such a high amount of money.”

Curry held a four-day, overnight camp at the BYU-Hawaii campus over the Fourth of July weekend. As the reigning two-time NBA MVP, Curry is in demand no matter where he goes. So, of course, kids wanted to go—but to do so, it cost Mom and Dad from $2000-2250.

Bennett doesn’t understand why some guys have to charge so much. Many families can’t afford even a minimal cost, but by charging a couple of thousand dollars Curry essentially makes the camp an exclusive event for the wealthy.

“In my mind, it’s like, how much money do you need before you start giving back for free? And I think a lot of athletes should start focusing on that,” Bennett added.

Bennett, who lives in Hawaii and has since, he married his wife, Pele, who is from the famed North Shore. So he has a strong connection to the community and would like to see athletes give back to it—especially when it comes to kids.

“If you do have a camp and you charge money for it, you need to make sure that money that you take from this community, you give back to the kids that are paying for the camp. These are the kids that live here. When you leave Hawaii and you go back to wherever you’re at, or you come here, and you go back from this vacation you leave with a piece of paradise, but these people still live here every day.”

Some guys talk a good game when it comes to community relations, but then don’t practice what they preach. Bennett does. This weekend he is hosting the Fourth Annual Michael Bennett Football Camp in Oahu with the help of other NFL players, like San Diego Chargers linebacker Manti Te’o and Atlanta Falcons linebacker O’Brien Schofield–for free.

To be fair—not every NBA player charges for camps in Hawaii. A few weeks ago Milwaukee Bucks star Jabari Parker hosted a camp in Laie or over 200 kids, and they didn’t have to pay a penny.

Again, to be fair, there were probably facility charges, salary that had to be paid to university workers, utilities, and other expenses for Curry’s camp that had to be covered–but enough to charge at least $2000 a head? Doubtful.