Seattle Seahawks Are Taking A Big Risk With Russell Wilson

Ever since Pete Carroll made the call to start a rookie the team had selected in the third round of the draft, the Seattle Seahawks have been one of the best teams in football. Russell Wilson didn’t do it all himself, of course, but as the face of the franchise he gets a lot of the credit. His critics will say he doesn’t deserve any; that the defense is the key to Seattle’s success. The defense is a huge part of the Seahawks success in recent years, but someone had to guide the offense to a top 10 ranking (according to points per game) for the last four years.

So it is not hard to understand why the Seahawks want him in the lineup. However, with the injuries he has been hit with after just three weeks, it may not be a bad idea to give him a little time off so he can get healthy again. 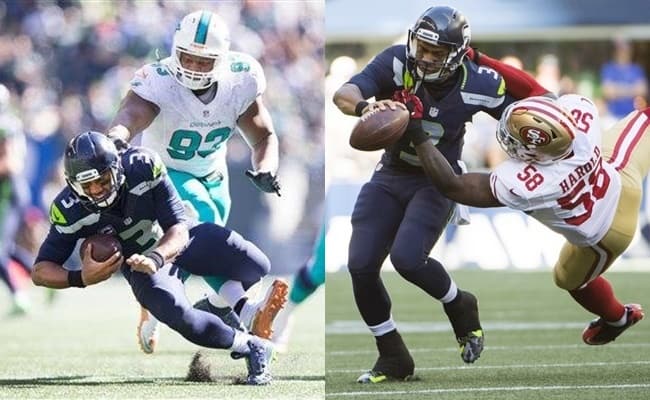 The concern over his health started in Week One when his ankle was stepped on by Miami Dolphins defensive tackle Ndamukong Suh. Rumor had it that he may have had a high ankle sprain; something that typically takes a few weeks to recover from. With how his mobility was clearly affected during the game, it wasn’t hard to see him needing a little time (NFL).

But then he ditched the walking boot pretty quick and was not even on the injury report for Week Two.

Fast forward to Week Three and he goes down again. This time, it was his knee; the MCL in his left knee to be precise. Late in the third quarter against the San Francisco 49ers, Wilson tried to stiff arm linebacker Eli Harold, but Harold held on and dragged Wilson down. In the process, his leg bent in a way that legs are not meant to bend.

When asked about it after the game, Wilson had this to say (ESPN):

“I didn’t know what happened, honestly. I was a little worried when it first happened initially. I was getting pulled down. I was like, ‘Uh-oh.’ ”

Ligament damage was feared and after the MRI the next day it was confirmed. He had a strained MCL—which if you are going to injure your knee, it is the best ligament to strain. Depending on the severity of the strain and the pain tolerance of the player, it may not be necessary to miss any time at all.

From what Seahawks head coach Pete Carroll and Wilson have said so far, he will not have to miss any time at all (NFL):

“He is remarkably well off for having a play like that. He looks good,” Carroll told reporters on Monday. “We feel like he’s gonna be fine.”

“I don’t think it’s severe as it looked,” Wilson said after Sunday’s game. “I have good mobility. … You always feel better when you win.”

For all we know, his knee could very well be fine. Maybe it was worse than it looks. Or maybe he is being a team player and toughing it out for the sake of the team. Many players have said in the past, that once a season starts everyone plays with some kind of injury, but they play through it because they don’t want to let the team down.

From what we have seen of Wilson’s personality, it is easy to see him being willing to tough it out. However, that could do more harm than good. With a suspect offensive line like Seattle has, his mobility is a big part of his game. Without it, he will end up getting hit a lot more than he is accustomed to. Should that happen, and he already has a bad knee and ankle, there is a good chance those injuries could become worse.

Do the need him? Of course they do! But do they want to miss him for one game or potentially for the rest of the season? Trevone Boykin didn’t look half bad in the preseason or in relief of Wilson last week. Why not go with him the start this week against the Jets?

That way Wilson has this week off, the next since the team has a bye and the better part of another week leading up to the Falcons game in Week Six.

Three weeks off could do a whole lot for Wilson’s health. It sounds a whole lot better than him missing the season because his injured knee gave out and something tears.