SNF Recap: Green Bay Packers At Minnesota Vikings—Sam Bradford Appears To Be Legit But Adrian Peterson’s Knee May Not Be

The Minnesota Vikings were as motivated as a team can be to win Sunday night against their hated rivals, the Green Bay Packers. Not only was it their first regular season game in their brand new, $1.1 billion stadium, but the quarterback they acquired barely two weeks ago—Sam Bradford–was making his first start.

Could he know the offense well enough after just a couple weeks? Was he going to be worth what it cost to get him? They wouldn’t know until he played, of course. 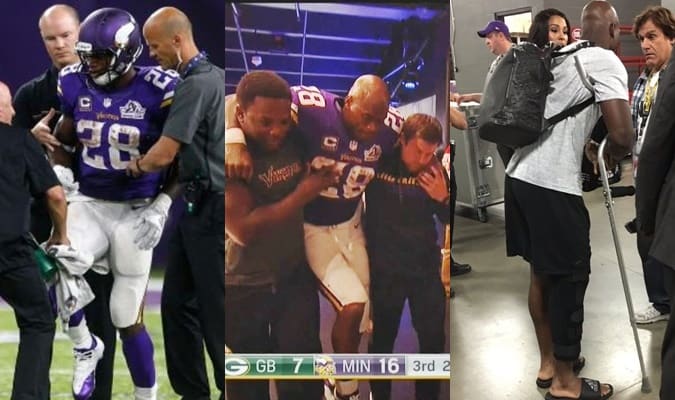 As it turns out—Sam Bradford might fit right in with the Vikings.

“He does everything the right way,” the Diggs said of Bradford after Sunday night’s win (TwinCities). “He works hard each and every day, and we communicate. To get on the same page, you’ve got to communicate. So, throughout practice and games, he tells me what he sees, I tell him what I see, and we try to make it work.”

The Vikings couldn’t get a running game going (30 yards on 22 carries), but between what Bradford was able to do in the passing game and the defense suffocating Aaron Rodgers and the Green Bay offense, the Vikings were able to pull out a 17-14 win—but it came at a cost.

Adrian Peterson went down in the third quarter with a knee injury. He ended up having to be carried off the field—and through what appeared to be a sports bar or restaurant with fans looking on—in order to get to the locker room.

According to the early rumors, the Vikings were testing his knee for stability. He was spotted on crutches and with a heavy-duty brace around his knee leaving the stadium. When he spoke with the media, head coach Mike Zimmer would not say Peterson would have to miss next week:

“He might miss a week. I don’t know if he will or not,” Zimmer said. “Whatever it was has calmed down now, so we’ll see.”

If you believe what Larry Fitzgerald’s dad tweeted, it sounds like Peterson is going to be fine:

I just spoke with Mrs. Adrian Peterson she said her husband would be okay. That he is walking on his injured knee.

After one start, trading for Bradford looks like a genius move by the Vikings front office, but if the team should lose Peterson for very long, it may end up being all for nothing.

Green Bay, on the other hand, is not having issues with injuries this season. The offense just looks like it hasn’t played together before. The offense did not look good in Week One, and the new and improved (aka slimmer) Eddie Lacy hasn’t looked much different than he did last season.

In spite of a night that saw him throw for 213 yards and one touchdown along with an interception, get sacked five times, fumble three times, and lose one, Green Bay quarterback Aaron Rodgers is not ready to panic just yet:

“Well, we’re not going to overreact,” Rodgers said. “It’s been two weeks. We’ve been not quite finding our rhythm yet, but we’ve got some guys working in that haven’t worked together a whole lot. So we’re going to trust the process and believe we can get this thing turned around.”

After opening the season with two road games, the Packers play at home for a month. If they can’t get things figured out, under those circumstances, it may be a long season for Packers fans.

The Vikings will be hoping to receive good news after Peterson gets an MRI on his knee Monday. They’ll need him if they are going to be competitive next week when they travel to Charlotte to play the Carolina Panthers.