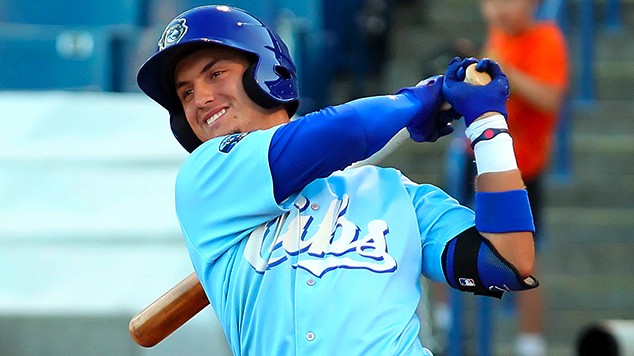 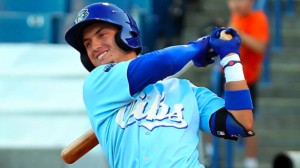 The young talent in the Chicago Cubs’ farm system just keeps on coming. The latest is outfielder Albert Almora, who made his major league debut Tuesday night against the Philadelphia Phillies after the Cubs placed Jorge Soler on the DL earlier in the day.

Almora was alerted Monday night to be ready to travel to Philadelphia after Soler left Monday’s game with a hamstring injury. The MRI Soler underwent Tuesday revealed a hamstring strain, prompting the Cubs to put him on the DL and call up Almora. “It’s a dream come true,” Almora said before the game about reaching the big leagues. “Twenty-two years old, and I’ve been playing baseball since I was 4 years old. This is what every kid dreams about.”

Almora didn’t start the game, but did get his first major league at bat, grounding out to third base as a pinch hitter in the 6th inning. Unfortunately, he did not have any family in attendance for his debut, as his father is currently being treated for prostate cancer. However, Almora was excited by being able to tell his father that he was going to the big leagues. “I can’t even begin to describe how that phone call went. After we talked about what’s going to happen, we just talked about life. It was so positive,” he said. “I know he wishes he could be here, 100 percent. But I understand. His health comes before the game of baseball. I’m just happy where he is right now, as well.”

The Cubs drafted Almora with the 6th overall pick in the 2012 draft. Heading into the season, the Cubs were unsure if he’d be ready for the majors at any point this year, but through 54 games at triple-A, Almora was hitting .318 with 18 extra-base hits, one of the best offensive seasons of his minor league career. Almora is also known as a strong defensive player who’s capable of playing all three outfield positions. He is almost universally ranked among Chicago’s top five prospects.

Almora was not in the starting lineup Tuesday, perhaps in part because he didn’t get much sleep the previous night, but manager Joe Maddon says he wants him to get regular at bats. Third baseman Kris Bryant started in left field Tuesday, but unless the Cubs want to make that a regular occurrence, Almora and Matt Szczur are the only true outfielders on Chicago’s roster who can fill in for Soler, which should allow Almora to play regularly. Second baseman Ben Zobrist is also capable of playing the outfield if necessary.

The Cubs don’t yet have a firm prognosis on Soler’s hamstring injury, but it stands to reason that he will miss at least two or three weeks, which could open the door for Almora to make his promotion to the big leagues permanent. Soler started to turn things around towards the end of May, but for the most part the season has been a struggle for him offensively. If Almora can perform well over the next couple of weeks, he could state his case to become a regular in Chicago’s outfield, although the Cubs have no intention of rushing the 22-year old into a full-time position if he’s not ready for one.