Sonny Gray Shut Down for Three Weeks with Lat Strain 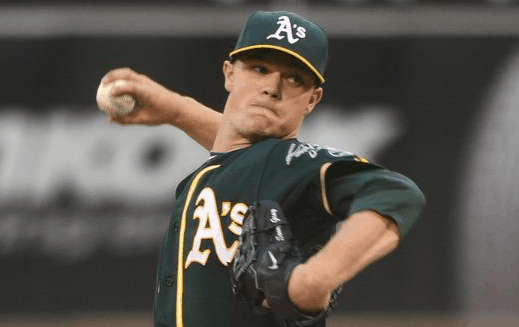 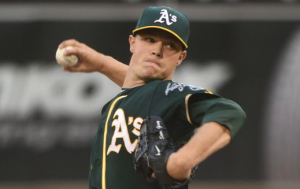 The Oakland Athletics are officially looking for an opening day starter. The team announced Thursday that ace Sonny Gray is being shut down because of a lat injury. Gray will refrain from any kind of throwing for at least three weeks, meaning he will open the 2017 season on the DL instead of on the mound for the A’s.

The injury is an unfortunate continuation of the problems Gray faced last season when he had two separate stints on the DL. The silver lining is that the injury is not arm related, as Gray missed six weeks late in 2016 because of a strained forearm. When he was able to pitch last season, Gray struggled, going 5-11 with a 5.69 ERA. He’s also had a rough spring, giving up seven runs in two innings during his most recent start on Tuesday.

Nevertheless, the A’s were optimistic that Gray would re-assert himself as the team’s ace in 2017. If that does end up being the case, Oakland will have to wait until at least the end of April to see Gray on a big-league mound.

“It’s very disappointing for him,” A’s manager Bob Melvin said of Gray. “He came to camp ready to go, worked as hard as he’s ever worked even though he’s a hard-working kid to begin with, was very positive, the stuff was really good. This is another setback, and he’s going to have to deal with it, as we are.”

With Gray ruled out for the season opener, Kendall Graveman and Sean Manaea become Oakland’s top candidates to take the ball on opening day. Graveman established himself as a key part of the rotation last season, going 10-11 with a 4.11 ERA over 31 starts. Manaea had similar success in his first big league season, going 7-9 with a 3.86 ERA. Jharel Cotton could also have an outside shot at being the opening day starter, as he’s turned heads during camp.

Of course, more important than who pitches the season opener is how the A’s will traverse the first month of the season with Gray. Oakland was already counting on Graveman and Manaea, but now Cotton becomes an even more important figure despite having just five major league starts under his belt.

Meanwhile, Jesse Hahn, Andrew Triggs, and Raul Alcantara are the top candidates to fill the final two spots in Oakland’s rotation. Veteran Ross Detwiler, who’s with the A’s on a minor-league deal, could also be an option, as could prospects Daniel Gossett and Frankie Montas.

“It just scoots everybody up a little bit and makes it a little bit more competitive here for the last couple of spots,” Melvin said. “You don’t expect to get tested like this right away. We had to deal with this last year as much as any team I’ve ever been on. You always prepare for it. Our organization really is on the cutting edge of depth. It’s something we’ve valued for a while, but again, this early in spring it’s tough to deal with, especially when it’s your No. 1 guy.”

As Melvin acknowledges, it may not matter who ends up filling the spots at the back end of Oakland’s rotation because they’re going to be a major step down from Gray. Even after a down season in 2016, Gray was going to be a vital part of the A’s in 2017. Missing him for the first month of the season puts the A’s, who are already a heavy underdog in the AL West, in a difficult position right from the start.