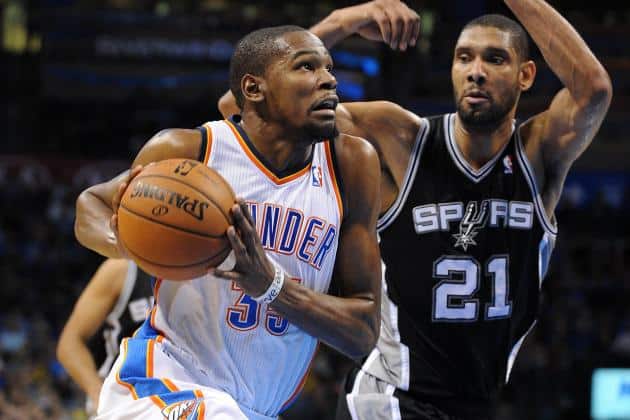 The Oklahoma City Thunder edged out the Spurs in Game 5

Fans of the San Antonio Spurs were not too worried about their team heading into Game Five Tuesday night. So the superstars they have come to know and love over the years had not been playing well the last couple of games. They were back at home where their team was practically unbeatable this season. Surely, the Big Three–Tim Duncan, Tony Parker, and Manu Ginobili–would not let the home crowd down.

Tim Duncan had all of five points and three rebounds. Tony Parker wasn’t much better with nine points, four rebounds, and five assists. Manu Ginobili only managed three points and a pair of rebounds. Combined they shot 6-20 with Duncan and Ginobili chipping in just a single shot each. It certainly didn’t help that LaMarcus Aldridge only shot 6-21 on the night as well.

As usual, the Thunder bench was pathetic, but all they have needed of late was a great game from one of their two stars. Kevin Durant took the mantle in Game Four, but for Game Five Russell Westbrook was the one.

“Russ was a maniac tonight keeping us in it,” Durant told the press.

Westbrook nearly had a triple-double on the night with 35 points, 11 rebounds, and nine assists. He did his best work late in the game when he hit a three-pointer to cut San Antonio’s lead to three with about a minute and a half to play and then set up Kevin Durant for another one to tie the game twenty seconds later.

He had 10 points, three assists, and four rebounds in the fourth quarter alone.

For San Antonio, it is not over, but it sure isn’t looking too good. In the previous game, they were not sharing the ball like they usually do. This time, they were not hitting their shots down the stretch or rebounding well.

“We just missed a lot of easy shots,” Aldridge told the media after the game. “I thought our guys had great looks. I had a couple of shots that I normally make that came out. I thought our guys competed, but the ball didn’t fall for us.”

The Thunder were 32-9 at home during the regular season, so a win is not impossible for the Spurs. If it is going to happen, San Antonio will need LaMarcus Aldridge and Kawhi Leonard to have big nights like they did in Game One.

It would help if Tim Duncan, Tony Parker, and Manu Ginobili would wake up and have a good night, but they have looked nothing like the clutch players they once were since the playoffs began.

It will be up to Aldridge and Leonard to keep the Spurs alive with a win in Game Six in Oklahoma City Thursday night.

If they can’t get it done, fans can hope that Durant and Westbrook have off nights, but with a chance to eliminate the Spurs at home chances are at least one of them will put on a show.