Spurs-Thunder Game 6 Recap: Out With The Old And In With The Thunder 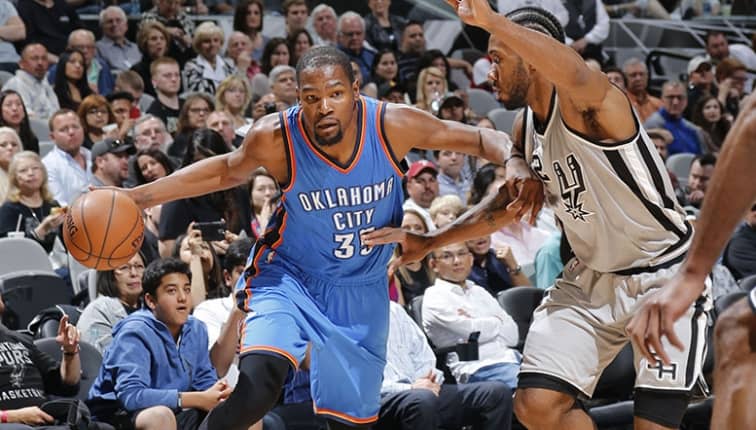 Kevin Durant and Russel Westbrook led the Thunder over the Spurs in Game 6.

The San Antonio Spurs had not lost three in a row all year. With 67-wins under their belts in the regular season, they clearly know how to win. So if there was any team that could overcome a 3-2 series deficit, it was San Antonio. That is, as long as Kawhi Leonard and LaMarcus Aldridge played well and the Big Three woke up and started playing like the future Hall of Famers they are.

The Big Fundamental, Tim Duncan, finally woke up with his highest scoring output of the postseason, but he wasn’t enough. Leonard had a hard time getting his shot to fall (9-23). He and Aldridge combined for just 40 points. Once again, Tony Parker and Manu Ginobili failed to show up with just 11 points between the two.

The night started off well for the Spurs. With about four minutes to go in the first they had an early lead, 19-13—but then the wheels fell completely off as the team floundered to a 55-31 deficit at the half.

“I thought they did a great job of coming out and punching us in the stomach,” Leonard said after the game. “But we got some open looks that didn’t go down, turned over the ball a couple of times, and that’s all on me.”

Russell Westbrook and Kevin Durant played well, but they were also the beneficiary of an ice-cold display of shooting by San Antonio. They barely shot over 30 percent from the floor in the first half and only hit five of 23 shots in the second quarter (0-6 from three-point range).

San Antonio finally woke up in the third quarter with more points than they had in the first half, 34. However, the Thunder didn’t slow down and chimed in 36 to take a 91-65 lead going into the final period.

A valiant effort in the fourth period made the final score a respectable 113-99.

After the game, Duncan made sure to give credit where it was due:

“We always give credit to our opponents, and obviously, OKC turned it up there and turned our execution into forced bad shots, and then we kind of trickled down from there, and it snowballed,” Duncan said. “We put ourselves in the hole. We actually played somewhat solid for the second half, but it was too little, too late.”

While guys prefer to go out on top, if this is the last game for the aging trio of Tim Duncan, Manu Ginobili, and Tony Parker it was a pretty quiet swan song. Duncan did have 19 points on the night, more than he had in the first five games, but Parker and Ginobili barely made any contribution at all.

The big question on everyone’s mind after the game had nothing to do with the Thunder and how they match up with the Golden State Warriors (who they play next in the conference finals), but what as next for Tim Duncan.

Is he going to retire? All he said was:

“I’ll get to that after I get out of here and figure life out.”