Spurs-Thunder Recap: No Triple Double For Russell Westbrook And No Win For Oklahoma City

Without Kevin Durant, the Oklahoma City Thunder are not as dangerous, but that does not mean they are a team that should be taken lightly. Losing his partner-in-crime has resulted in Russell Westbrook playing at an incredible level every time he steps on the court—and often, walking off of it having recorded yet another triple-double.

Tuesday night, Westbrook was likely hoping to do two things—lead his team to a win over the Spurs and record his first triple-double against San Antoni0. 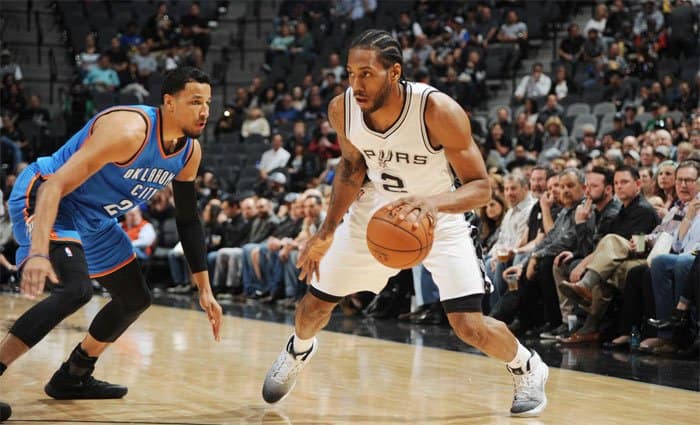 San Antonio got out to a nice lead with the help of an 11-0 run at the end of the first period to take an early, 31-17. The Thunder bounced back a little in the second period and was able to close the gap to 52-42 by the end of the first half. San Antonio stretched the lead out to 18 in the third, but a 23-4 run gave the Thunder a 69-68 lead late in the period—but not for long.

A 20-6 run by the Spurs late in the third and heading into the final period put San Antonio back on top for good. Holding Westbrook scoreless during the final period as did Kawhi Leonard exploding for 12-points even though he just played 4:15.

The Spurs went on to win 108-94. Kawhi Leonard led the way for San Antonio with 36 points and eight rebounds followed by LaMarcus Aldridge’s 25 points.

“(Green) set the tone for us defensively and did a really good job on a great player to start the game,” Spurs head coach Gregg Popovich said. “That was important for us.”

Westbrook led the way for the Thunder but had a fair amount of help from Domantas Sabonis (13 points), Steve Adams (16 points), and Victor Oladipo (15 points). After the game, Westbrook expressed a desire to figure out how to get more from the team’s reserves:

Along with 27 points, Westbrook had 14 assists, but only six rebounds to extend the streak to 47 games against the Spurs without a triple double. 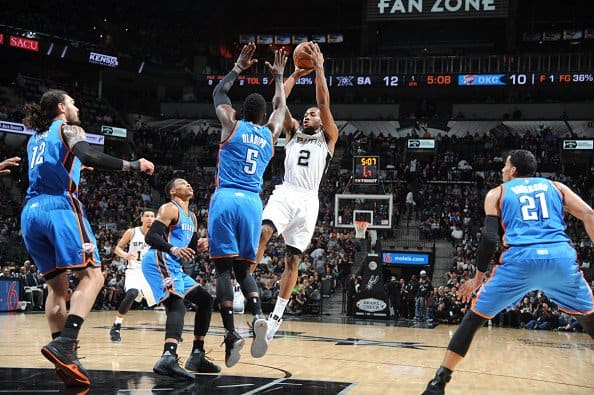 Popovich talked about the poor effort in the third quarter and how wanted to see if the team could play their way out of the funk:

“I didn’t call any timeouts; just let them go,” Popovich said. “Sometimes, that’s a great lesson: to try to live through it, deal with it, and not use the timeout as an out, so to speak. I let them stay out there and figure it out, and they did a good job of it. I didn’t love doing it. I was a nervous wreck, but we did it.”

San Antonio will try to keep the good times rolling when they face the Philadelphia 76ers Thursday night. The Thunder will try to get back on track against the Chicago Bulls Wednesday night.