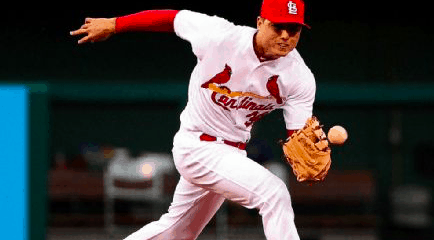 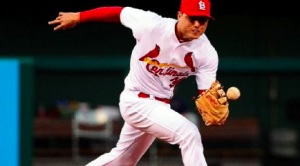 The 2016 season was an unusual one for the St. Louis Cardinals in that they missed the playoffs for the first time since 2010. Injuries played a key role in the Cardinals finishing a distant second behind the Chicago Cubs in the NL Central and missing out on a wild card spot. However, one aspect that can’t be overlooked is the team’s defense, as the Cardinals were ranked among the bottom five teams in the National League in several defensive metrics. St. Louis knows that playing better defense will be imperative to getting back to the playoffs in 2017.

One of the most important defensive positions on the field is shortstop, where the Cardinals were forced to go with rookie Aledmys Diaz last season. Diaz performed great offensively, hitting .300 with an OPS of .879, but his inexperience showed at times on defense. Despite Diaz emerging as the team’s every day shortstop, Cardinals manager Mike Matheny has lamented the situation that forced him into such a prominent role as a rookie.

“Jhonny (Peralta) got hurt in spring training, (Ruben) Tejada got hurt and, all of a sudden we’re thinking about who’s going to play shortstop on opening day,” Matheny recalls. “You could call it an excuse but, to me, it’s reality. I can’t believe people haven’t focused on (those things) more.”

Matheny believes that Diaz being forced into duty at such an important position made it difficult for St. Louis to remain stout up the middle. “You throw a young player onto a contending team at that position and then you had a center fielder (Randal Grichuk) who really hasn’t had his feet on the ground either,” explains Matheny.” So, up the middle, defensively, you’re talking about Yadi (Molina) being the one staple while the other three are young players.”

However, the St. Louis skipper is confident that the Cardinals will be better on defense in 2017. Matheny says that defensive instructions during spring training will be more “personalized” than in the past, with the hope that it will get the team’s younger players up to speed faster. The Cardinals will also have Ozzie Smith and Jose Oquendo, two of the greatest defensive players in baseball history, working with players this spring.

In the outfield, the Cardinals are hopeful that with Dexter Fowler taking over in center field and Grichuk moving to left field, the team’s outfield defense will improve. Despite being a great athlete, Fowler has graded out poorly as a center fielder for much of his career. However, he began to turn things around last season with the Cubs after changing his positioning. If he can continue to play solid defense in center field, it’ll make a noticeable difference for the Cardinals.

Meanwhile, Grichuk grades as an above-average defensive player if he’s playing a corner spot, as opposed to center field. He should be a significant upgrade defensively over the contingent of left fielders the Cardinals used last year. In right field, Stephen Piscotty is also a sound defensive fielder, and he should benefit from playing next to a center fielder like Fowler who can cover a lot of ground. Together, the trio of Grichuk, Fowler, and Piscotty may turn out to be one of the better defensive outfields in the National League this year.

Obviously, the Cardinals have a lot of ground to make up after finishing last season 17.5 games behind the Cubs. But if St. Louis can make strides on the defensive side of the ball after a dreadful season in that department in 2016, it could go a long way towards putting a few more games in the win column and getting the Cardinals back to the postseason in 2017.