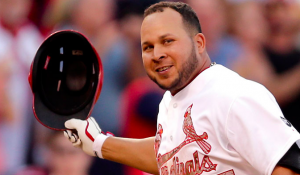 The St. Louis Cardinals are giving Jhonny Peralta at least 10 days to clear out his lungs, and perhaps his head as well. On Thursday, the Cardinals placed Peralta on the 10-day DL with an upper respiratory infection.

Peralta goes to the DL at a time of immense struggle, as the 34-year appears to be on the verge of losing his job as the team’s primary third baseman. Aside from helping Peralta recover from the respiratory infection that has kept him off the field the past few days, his stint on the DL may be a chance for him to hit the reset button on his 2017 season.

Peralta has just three hits in his first 25 at-bats of the season (.120 batting average). He’s also coming off one of the least productive seasons of his career in 2016, as he hit .260 with a .725 OPS while serving multiple stints on the DL. Between a sluggish 2016 season and his slow start in 2017, the Cardinals have to wonder how much Peralta, who is in the final year of his contract with the club, has left in the tank.

“It’s happened to me before, but at the same time I’ve played on a couple different teams and before they had confidence in me,” Peralta said earlier this week. “They believed in what I do and, by the end of the season, I have my numbers. Right now, it’s a tough time.”

Peralta signed a four-year deal with the Cardinals prior to the 2014 season. He spent his first two years in St. Louis as the team’s every day shortstop. However, after Aledmys Diaz emerged last year when Peralta began the season on the DL, he was moved to third base. He retained the job at third base at the start of this season, but he may find himself fighting for his job when he returns from the DL.

Jedd Gyorko and Greg Garcia figure to share time at third base while Peralta is unavailable. Neither has had a particularly promising start to the season, although few Cardinals have. That being said, both Gyorko and Garcia are capable of taking at-bats away from Peralta even after he returns. Gyorko is hitting just .226 early in the year, but he slugged 30 home runs for the Cardinals last year. Garcia, meanwhile, doesn’t bring as much power to the table, but he’s certainly capable of contributing more than Peralta has this season.

The Cardinals could also entertain the possibility of moving Matt Carpenter back to third base. Carpenter is currently the team’s primary third baseman, although he could move to third, opening up first base for some combination of Gyorko, Matt Adams, and Jose Martinez. Adams has also struggled early in the season, but the Cardinals would like to get his bat in the lineup more often if possible. Martinez, meanwhile, is one of the few hitters the Cardinals have who has started fast in 2017.

What this means for Peralta is that his job could be in jeopardy while he’s on the DL recovering from a respiratory infection. Peralta is unlikely to remain in St. Louis beyond this season, and so if Gyorko or Garcia get hot while he’s on the DL, it’ll be easy for the Cardinals to put Peralta on the bench. Even if Peralta is able to retain his job when he returns from the DL, he’ll be under pressure to start producing the way he has in the past; otherwise, the Cardinals will not be shy about exploring all of their options at third base.